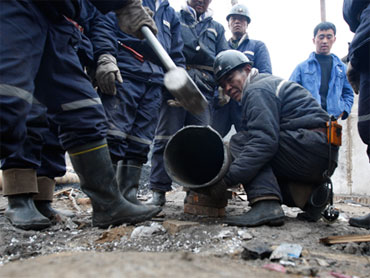 Sounds of tapping and maybe shouts were heard Friday coming from the pipes of a flooded Chinese coal mine where 153 workers were trapped more than five days earlier, a rescue official said.

Rescuer Zhao Chuan told The Associated Press by telephone that rescuers at the Wangjialing mine in the northern province of Shanxi heard what sounded like people knocking on pipes around 2 p.m. (0200 EDT) local time, the first signs of life since the mine was flooded with water Sunday afternoon.

Zhao said he had heard from colleagues that another rescue team reported hearing people shouting underground as well but he could not yet immediately confirm that account.

Government officials have said the flood was triggered when workers digging tunnels broke through into an old shaft filled with water. Rescuers have been working around the clock to pump water out of the mine.

Wen Changjin, an official from the news centre set up at the site, said rescuers tapping on the pipes began to hear tapping responses from about 820 feet below ground at around 2 p.m.

Wen said officials at the news centre had heard no reports of shouting.

He said they've started sending glucose and milk down the pipes to the spot where tapping was heard.

Zhao was quoted by China Central Television as saying that an iron wire was found tied to a drill rod and rescuers think it may have been attached by one of the trapped miners.

State television showed rescuers tapping on pipes with a wrench.

This could prove to be the deadliest mine accident in China since a coal mine flood in eastern Shandong province in August 2007 killed 172 miners.

The 153 workers were believed to be trapped in nine different places in the mine, which was flooded with up to 5 million cubic feet of water, state television has reported.

China's coal mines are the world's deadliest, despite a successful multiyear government effort to reduce fatalities. Most accidents are blamed on failure to follow safety rules or lack of required ventilation, fire controls and equipment.

Accidents killed 2,631 coal miners in China last year, down from 6,995 deaths in 2002, the most dangerous year on record, according to the State Administration of Coal Mine Safety.