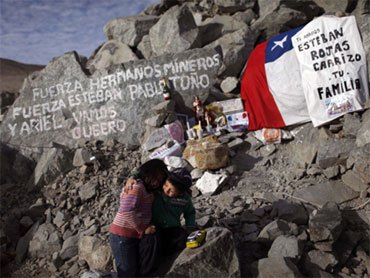 The men, who escaped to an underground "refuge chamber" when their mine shaft collapsed on August 5, have existed for two and a half weeks on shared rations, each consuming two spoonfuls of tuna, a sip of milk and a biscuit every 48 hours.

Through a newly-installed communication system in one of two tiny bore holes, the miners told authorities Monday that they had used a backhoe to dig for trapped water.

Capsules carrying oxygen and water, glucose and rehydration tablets to restore the miners' digestive systems, were sent down through a six-inch bore hole to help the men survive the lower reaches of the gold and copper mine, where temperatures in the mine can surpass 90ºF.

Actual food will be sent down in several days, after the men's stomachs have had time to adjust, said Paola Neuman of the medical rescue service.

Rescuers also sent down questionnaires on Monday to determine each man's condition, along with medicine and small microphones to enable them to speak with their families during their long wait.

Officials released a portion of the recording of the dialogue, in which miners are heard singing Chile's national anthem.

In a conversation on Monday, each man spoke and reported feeling hungry but well, except for one with a stomach problem, a Chilean official said.

One of the miners' first requests: toothbrushes.

Rescue leader Andre Sougarret said officials are organizing the families into small groups to keep their talks as orderly as possible.

Meanwhile, the miners were sending up notes to their families in the same supply capsules on Tuesday, providing solace to people who have held vigil since the mine's collapse.

The first contact was made on Sunday when a probe drilled into the Earth was brought back to the surface with a note attached reading: "Estamos bien en el refugio los 33" ("All 33 of us are fine").

A letter from miner Mario Gomez, 63, to his wife Liliana was also retrieved, in which he described the miner's ordeal.

The letter, which the miners tied to the drill bit, was full of expressions of faith and determination, revealing to the world that the miners were holding strong.

"Even if we have to wait months to communicate ... I want to tell everyone that I'm good and we'll surely come out OK," Gomez wrote, scrawling the words on a sheet of notebook paper. "Patience and faith. God is great and the help of my God is going to make it possible to leave this mine alive."

Rescuers had drilled repeatedly in an effort to reach the shelter, but failed seven times. They blamed the errors on the mining company's maps. According to Gomez's note, at least some of those earlier probes were close enough that the trapped miners heard them. The eighth attempt finally worked.

And while his message focused on faith and love for his family, his frustration also showed through. He wrote that "this company has got to modernize."

Chile is the world's top copper producer and a leading gold producer, and has some of the world's most advanced mining operations. But both the company that owns the mine, San Esteban, and the National Mining and Geology Service have been criticized for allegedly failing to comply with regulations.