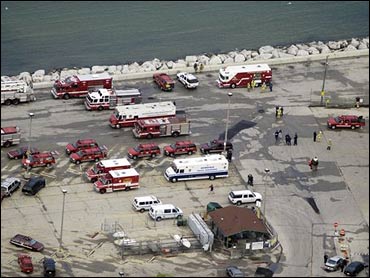 Authorities are searching for two pilots and four doctors from an organ transplant team whose plane went down Monday afternoon in Lake Michigan shortly after the pilot signaled an emergency.

As many as 32 divers from the police, fire and sheriff's department have been searching near debris and an oil slick in about 20 feet of water.

That's according to Milwaukee Fire Chief Doug Holton, who says the plane was traveling an estimated 185 to 190 mph, and the impact on the water would be "absolutely devastating."

Witnesses saw the plane go down about six minutes after takeoff, according to U.S. Coast Guard Capt. Bruce Jones, in charge of the search and rescue operation.

Jones said the water temperature is 57 degrees and survivors could live for 16 hours. He said they have not found any bodies.

"Our primary focus is on finding any survivors there may be from this incident," he said.

Rescuers suspended the search Monday night after more than six hours and are to resume their work at first light on Tuesday.

Jerry Guyer, a salvage and diving guide, is using his high-definition sonar unit to help in the search. He said the unit is towed in back of his boat by a 50-foot cable and can detect objects within 100 feet of it.

"I used to look for shipwrecks," Guyer explained. "It works very well for anything on the bottom, from a car tire up as far as being able to pinpoint an item and location."

Federal Aviation Administration spokesman Tony Molinaro said the Cessna Citation took off from General Mitchell International Airport in Milwaukee at 4 p.m. and was headed for Willow Run airport near Detroit, a 42-minute flight.

"Within five minutes of its departure from the airport the pilot declared an emergency and requested a return to Mitchell, but at that time the plane was no longer on our radar screens," said Molinaro.

An aviation source tells CBS News that the Cessna was on a "lifeguard" flight, which means it was given priority clearance.

The plane dropped off radar screens just after the pilot requested to return to the airport, and authorities notified the Coast Guard, Molinaro said.

Coast Guard searchers found what they believe was the plane around 4:20 p.m., about 20 minutes after being notified, Petty Officer David Warfel said. The debris was found about six miles northeast of Milwaukee, according to Molinaro.

So far, says Molinaro, there has been no sign of the four passengers or its two crew members.

The plane was leased by the University of Michigan Health System in Ann Arbor, according to a university news release. It's owned by Toy Air and based at Willow Run Airport, near Ypsilanti, Michigan.

The university identifies the persons aboard as two pilots and four doctors from a transplant team that was returning from Milwaukee with unspecified organs for transplant to a patient in Michigan.

"The thoughts of the entire university community are with the families of those involved this evening, and we take consolation in the fact that the team was on a mission to help another," said Dr. Darrell A. Campbell, chief of staff of the University of Michigan Hospitals & Health Centers.

When system officials found out about the crash, they notified the transplant team in Michigan to stop preparing the transplant candidate. The patient is in critical condition, according to the university, which declined to make public any further information, in the interests of protecting the privacy of the patient.