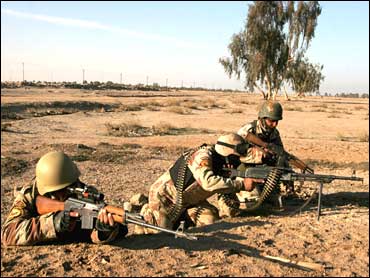 As President Bush begins to send 21,000 additional troops to Iraq, the world will be watching to see if they will have any impact on the security of Baghdad and the equally deadly and unstable Anbar Province. Even if they do, the improvements will be temporary unless the Iraqi Army and police forces prepare themselves properly to take over the security mission we are performing.

Not highly publicized, but of paramount importance, are the hundreds of U.S. Army trainers who are also going to Iraq to work with the Iraqi Armed Forces and National Police. They represent the best hope for the timely withdrawal of U.S. forces. Their job is to train the army and police to a standard that will allow them to assume the security mission for their country.

Training encompasses instruction, practical work and testing to a standard. It begins with individual training and progresses through large group coordinated activities. It is not as complex for the junior members of an organization as it is for the senior ones. Senior members must know not only the basics of the profession, but also how to train and lead their people. It is precisely the Iraqi leaders' abilities to train their subordinates that will determine whether or not we succeed. The concept is called "train the trainer."

The task of training the trainer is based on the idea that we should only have to train the leaders and let them do the rest of the training for their soldiers and police. It is a methodology that has worked for us for many years and made our Army and police forces the best in the world. Our senior leaders train those leaders who are junior to them. The junior leaders, in turn, train those below them. Leaders also train their subordinates in all other subjects pertaining to their profession. They range from marksmanship training to large unit responses to crises and incorporate hundreds of subjects, Achieving proficiency in all those areas takes time, a luxury the Iraqis don't have.

Engaged in a variety of security missions throughout the country, Iraqi military and police forces are hard-pressed to conduct all the training they need before becoming engaged with their enemies. The results are telling and also exasperating for U.S. and Iraqi leaders alike, as performances fall far short of standards. Contributing to the problem is the fact that Iraqi Army non-commissioned officers (NCOs) are products of decades of taking orders under the Saddam regime but never being leaders themselves. Our system of training, which has always produced high-quality NCOs, is based on preparing soldiers to be leaders from the time they enter the service. That is what we are trying to do with the Iraqi Army.

Leadership training is complex. Not every Iraqi is suited to be a leader. The training should determine who will qualify. Some army officers have had previous experience and should do well. For others, the challenge will be greater, and the attrition rate will reflect that. Ultimately, those who qualify as leaders will have to be the trainers for the remainder of the army and police.

It is one thing to be trained and entirely another to be a trainer. Not all leaders have the skills to be good trainers, so the number of Iraqis who qualify as leaders and who can actually train their soldiers and police correctly will not be all that large. We must train those leaders in the techniques of being a good trainer and supervise them carefully to ensure they maintain high standards. Our advisers with the Iraqis will do all those tasks.

With practice, the Iraqis will become confident in their abilities, more effective as trainers and less reliant on us to do their jobs. But, all this will take time, and we must have the patience to make it work. The project could last at least 10 years.