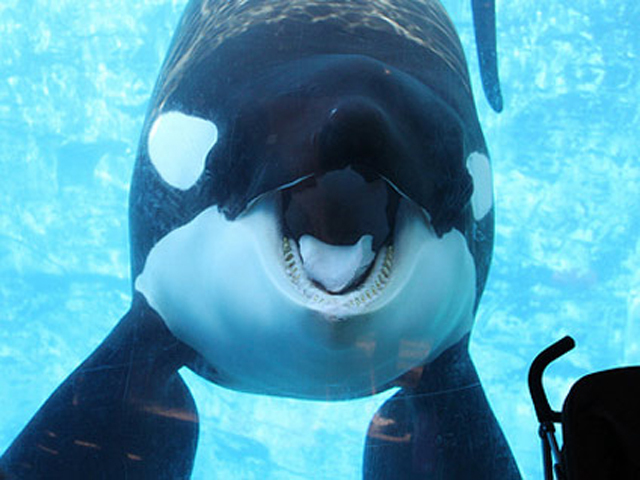 One year after a trainer was savagely killed by a whale at SeaWorld in Orlando, Fla., the whale responsible for her death has made a controversial return to performing, though trainers will no longer be allowed in the water.

Whale that killed trainer back at SeaWorld show

On Wednesday, more than 5,000 fans packed SeaWorld's Shamu Stadium, as Tilikum, the killer whale, made his first public appearance in more than a year, Mike Deforest, of CBS News affiliate WKMG Orlando, reported on "The Early Show."

But the fanfare could do little to mask what happened there in February 2010, when the six-ton orca dragged 40-year-old trainer Dawn Brancheau to her death, in front of a group of horrified onlookers.

Since Brancheau's death, SeaWorld trainers have been subject to a new set of rules. Trainers are no longer allowed in the water during live shows, long hair must now be tied back, and new safety bars have been put into place.

Tilikum has been kept virtually isolated until now. In a statement, SeaWorld said Tilikum is being returned to the stage because, "It is an important component of his physical, social and mental enrichment."

SeaWorld visitor Melissa Ferguson said, "You take the risk by being a trainer, you take your life into your own hand. You never know what could happen."

But Brancheau isn't the first person Tilikum has killed, Deforest reported. In 1991, 20-year-old trainer Keltie Byrne died while working with the whale, and in 1999, 27-year-old homeless man Daniel Dukes was killed after jumping into the whale pool unsupervised. Critics say it's only a matter of time before another tragedy occurs.

Bryan Wilson, of People for the Ethical Treatment of Animals, said, "Just because they had one show where Tilikum didn't injure or kill someone doesn't mean this may not happen again with Tilikum or really any of the other orcas."

Former SeaWorld trainer Samantha Berg echoed Wilson's words in an "Early Show" interview Thursday morning. She said having the whale back in the show may be good for the animal's overall health, but could possibly lead, again, to tragedy.

"Tilikum has been involved in the deaths of three people over the past 20 years. So when you put him back into the show, of course, he's going to have more interaction with trainers, and you're risking that another tragedy could happen," she said. "You know, it might not be today, it might not be tomorrow, but somebody could make a mistake and there could be a fourth death. I really don't think it's in SeaWorld's best interests to take that risk."

Co-anchor Erica Hill asked Berg how much she knew about Tilikum's past when she worked at SeaWorld.

Berg recalled, "I was at Shamu Stadium in '92 when Tilikum arrived. And my understanding about Tilikum's involvement with Keltie Byrne's death was that she slipped and fell in the pool, and then the other whales actually were involved in her death, and all Tilikum did was carry Keltie's dead body around on his back and it took two hours to retrieve Keltie. My understanding was actually she died of hypothermia relatively quickly. Of course '92, was pre-Internet days. Now I've done a lot of research. What I learned was Keltie's death was very similar to Dawn's death in that she fell in. One of the whales grabbed her, kept her from getting back out, and then Tilikum and the ... other two whales at Sealand in the Pacific all were involved in preventing Keltie from getting out of the water. They actively prevented her from getting out of the water. So Tilikum was involved in her death than a larger way than I knew about when I was working at the stadium."

Berg said the trainers are not given enough information by SeaWorld.

"My understanding of the animal's past was very limited," she said. "In fact, there had been 30 incidents between killer whales, and trainers prior to my being hired at the park. And I didn't know about any of them until after I left SeaWorld. So I think that's a serious mistake on SeaWorld's part that they weren't letting people know the history of all the animals."

She added the animals' state in captivity is another issue.

"These animals are severely stressed because of their diet and because of their lack of socialization," she said. "And so no matter how much information the trainers are given, there's still always that potential that something tragic could happen."

As for Tilikum, she said being part of the show will help his physical and mental state.

"He's been out of shows for about 13 months, so he's really completely out of condition," she said. "He's also been extremely stressed, because he's got broken teeth and he's been on antibiotics on and off. We know he's chronically dehydrated because he's eating about 10 gallons of gelatin a day, which is about 80 pounds of gelatin just to keep him hydrated because he's eating dead fish. And he's also just been really isolated. So of course, putting him back in the shows would be a good thing for him. It would get him back in condition and it would be socially stimulating for him. So from that standpoint, SeaWorld does have a point."

The park still intends to get staff back in the water on a limited-basis for training sessions with the whales at some point, Deforest of CBS' Orlando affiliate added.

Additional safety measures are planned, including rising floors to lift trainers and whales out of the water, portable oxygen for trainers, and underwater vehicles that would distract whales during an emergency.