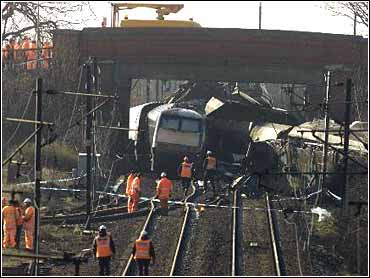 Rescuers working in wet and frigid conditions Thursday pulled the last known victims from a shattered express train, while the eerie sounds of mobile phones rang in the mangled wreckage.

Thirteen bodies were recovered from the site of Wednesday morning's accident in northeast England, when the passenger train collided with a car and a freight train in an improbable and catastrophic chain of events. Police said more bodies could be trapped underneath the wreckage.

The bodies were taken to a makeshift mortuary while emergency workers searched the wreckage of the train for possessions that could help identify the dead. As they worked, mobile phones inside the train rang sporadically.

"These may be from people trying to ring their loved ones to see if they are all right," said Chief Inspector Martin Hemingway of South Yorkshire Police. "It is quite an unnerving sound."

Seventy people were injured in the accident, and 33 remained in hospitals Thursday evening. The accident is the fourth fatal British rail crash in as many years.

At the crash site, workers hurried to complete the difficult and dangerous task of recovering the bodies so that the corpses would not spend a second night in the open.

"The recovery operation is a matter of some urgency because there are a lot of foxes in the area, and grisly though it may sound, we do not want them contaminating the site," said Superintendent Tony Thompson of the British Transport Police.

Construction crews were shoring up the sodden ground around the site so heavy equipment could be used to clear the widely scattered wreckage of the two trains. It could take up to 10 days to haul away all the wrecked cars, Thompson said.

"It's got to be taken away piece by piece," he said.

The train operator, Great North Eastern Railway, said the driver of the express train, John Weddle, and onboard chef Paul Taylor were among those killed. One of two drivers on the freight train also died.

Relatives of passengers missing and presumed dead were gathering at two reception centers set up in nearby towns, and were to be allowed to visit the crash site later if they wished.

Authorities are still trying to determine why a Land Rover towing a car on a trailer went off a highway, down an embankment and onto the train tracks, triggering the two derailments.

The frantic driver was able to get out of his car and call emergency services on his mobile phone. Less than a minute later he shouted "The train's coming!" and the passenger train, reportedly traveling at about 120 mph, hit the car, derailed, and careened into an oncomig coal train.

Thompson, the police superintendent, said road conditions were "pretty slippery" at the time, but "all aspects are being looked at, including whether (the driver) fell asleep."

The driver was identified in news reports as Gary Hart, 36. His wife, Elaine Hart, rejected the suggestion he had fallen asleep at the wheel.

"It was definitely an accident. He is very distraught," she said. "It is rubbish that he fell asleep at the wheel.

"He is more than willing to cooperate with the British Transport Police, but he has been asked not to comment at this stage," she added.

For survivors, the reality was just beginning to sink in.

"At the minute they just feel gratitude and amazement that they have come out alive," said Bishop of Pontefract David James, who comforted the injured at the town's General Infirmary.