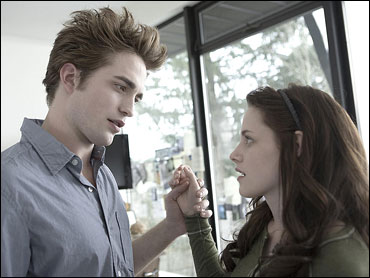 If you think Lady Gaga and Beyonce have the market cornered on media frenzy this week with the release of their provocative "Telephone" music video, think again.

Social media sites and theIinternet have been bombarded with frenzied fans from around the world all wanting the same thing - to get a first look at the official trailer of "Eclipse."

The harbinger of this third installment in the "Twilight" saga made it online this week, much to the delight of Twihard tweens and teens the world over, all suffering from OCD, or Obsessive Cullen Disorder.

This next chapter in Stephanie Meyer's hugely successful vampire saga sees a further deepening of tension develop between the Edward (Robert Pattinson), Bella (Kristen Stewart) and Jacob (Taylor Lautner) love triangle. In the sneak peak Summit Entertainment released, viewers see the camera in the opening scene sweep over luscious green fields before settling in on an impassioned Edward, with Bella at his side, professesing his eternal love .."Isabella Swan...I promise to love you for every moment, forever."

Cut to the end of the clip where Jacob says to a torn Bella "I'm going to fight for you...till your heart stops beating." Just the stuff pubescent romance novels are made of.

You don't need to be a die hard Twilight fanatic to realize that the triquel in this fantasy love saga pretty much capitalizes on what has worked so well for its' two predecessors - romance and making young girls swoon.

New this time around is the man in the director's chair - David Slade. It remains to be seen whether his own influence, coupled with a definite uptick in the action sequences over the first two films, can attract young male viewers and make "Eclipse" appeal to an even broader audience than the first two films. Fans also get a first look at the 'new' Victoria, played by Bryce Dallas Howard, who replaces Rachelle Lefevre as a vampy villain.

Distributors are well aware of the frenzy generated by the release of the trailer and are feeding it by coinciding its debut with the DVD release of "New Moon" this weekend. Twihards can get their copies starting midnight Friday, as retailers like Best Buy will open their doors to customers at midnight and some stores, including Wal-Mart, are hosting midnight release parties in participating stores.

All of this to mount excitement to fever pitch for "Eclipse"'s release. Love it or hate it, look for this newest film in the "Twilight" story to hit theaters June 30.

Also buzzing on the internet are just released trailers for "Iron Man 2" opening this summer and "Tron Legacy," slated for a December release. Both promise intense, non-stop action. Look out for a whip-wielding Mickey Rourke to stir things up for billionaire Tony Stark (Robert Downey Jr.) and sidekicks James "Rhodey" Rhodes (Don Cheadle) and Peper Potts (Gwyneth Paltrow) in this sequel to the juggernaut original.

Fresh off his best actor Oscar for "Crazy Hearts," Jeff Bridges reprises his role as Kevin Flynn in the sequel to the eighties ground breaking cult film "Tron." In "Tron Legacy" Sam Flynn (Garrett Hedlund), a rebellious 27-year old, tormetented by the disappearance of his father (Bridges), who was a leader in the field of video game development, finds himself sucked into the same alternate world of computer programs and war games his father has endured for 25 years. This Disney remake promises to be as futuristic in its use of technology as the original was back in 1982.

And for those looking for something to watch this weekend, you may want to check out "The Bounty Hunter." Gerard Butler gets his dream assignment - to hunt down his ex-wife played by Jennifer Aniston, who's a reporter working on a murder investigation. Hijinx ensues when the two are thrown together and they are forced to run for their lives to escape an even greater enemy than either of them are to each other.

And if you're wondering if sparks flew between the two during shooting, check out the Showbuzz to hear what Aniston and Butler had to say about their on and off screen relationship! Andy Tenant ("Hitch" and "Fool's Gold") directs this unconventional romantic, action comedy.