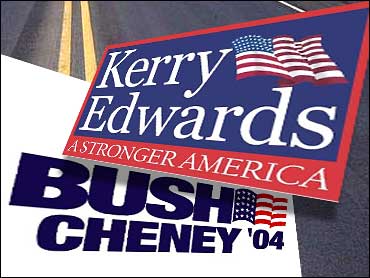 Why campaign in states he lost? First, his campaign figures the poll numbers are close enough to more than make it worth his while at this stage of the campaign. And he needs an Electoral Vote buffer in case he loses in Ohio, a state he won in 2000.

In no way is the Bush campaign conceding Ohio, but Mr. Bush hasn't been to the state since October 2nd. He is scheduled to make a quick stop there on Friday. It's more political algebra. Calculus, really. And the final exam is November 2nd.

As Election Day nears, the political attacks are clearly growing more bitter. Going further than ever yesterday in denigrating John Kerry, Mr. Bush declared that his opponent is neither "prepared" nor "equipped" to be president.

In each of his three campaign speeches in Florida, he accused his rival of
"relying on a litany of complaints and old-style scare tactics."

"As proven by his record and a series of contradictions in this campaign, my opponent will say anything he thinks will benefit him politically at the time."

The attack was a response to Kerry's charges that Mr. Bush was going to cut Social Security benefits and reinstate the military draft.

"I will do what I have said I will do. We will keep the promise of social security for our seniors. And there will be no draft as long as I'm the president," Mr. Bush said.

Mr. Bush said he expects American voters to "reject the politics of fear" as practiced by Kerry.

Looking to inoculate himself politically on the flu vaccine shortage, Mr. Bush tried to allay concerns about the matter, especially in a state in which senior citizens comprise a significant voting bloc.

"I want to assure them that our government is doing everything possible to help older Americans and children get their shots," he said.

Early in his first Florida speech yesterday, Mr. Bush said millions of additional doses of the vaccine are being stockpiled, and efforts are being made to make sure the most vulnerable Americans get the shots they need. He said he's grateful to those healthy Americans who are forgoing the vaccinations.

But it's an issue on which the Kerry campaign is trying to score political points. It announced yesterday that it's running a new radio ad in Florida that blasts Mr. Bush for the flu vaccine shortage.

Here's part of the text of the Kerry ad: "If they can't even deal with the flu vaccine, how are they going to deal with bio terror vaccines? I mean, George Bush and the Republicans are so busy kow-towing to drug companies, so busy giving them billions, helping them price gouge, pumping up their profits…so busy selling us out, they can't even get vaccines to keep pregnant woman safe from the flu. Four more years? They haven't earned it. Not even close. It's time for a new direction."

It's very tough stuff, and reflects the increasing harshness of the campaign attacks.

A Visit To Paradise

During one of the legs of his campaign bus trip yesterday, as he rolled from St. Petersburg to New Port Richey, the president's caravan stopped in the town of Safety Harbor, Florida.

The president made a mid-morning pit-stop at the Paradise Restaurant, greeting late breakfasters and early lunchers. And it seems Mr. Bush and his brother Jeb, the governor of Florida were a bit hungry too. The president ordered and paid for coffee and baklava.

On previous bus trips, Mr. Bush has been seen to buy bear claws, frozen custard, popcorn and other such treats.

He usually says he's carbing up for the campaign. At the current pace of the campaign, it goes without saying.
--Mark Knoller

Kerry started the day in Waterloo, Iowa - about 90 miles from Mason City where President Bush is campaigning today - and in his speech du jour, he railed on Bush's handling of Iraq and the war on terrorism.

"This president likes to say he's a leader," Kerry said according to prepared remarks. "Mr. President, look behind you. There's no one there. It's not leadership if no one follows."

"What we need is not personal attacks for political advantage, but a capacity to see reality and plan for success."

Kerry says that, but some of his comments in the last few days could be considered "personal attacks for political advantage."

For example: "A president has to be able to do more than one thing at the same time." -Wilkes-Barre, Pennsylvania yesterday (he used a variation of that line twice more on Tuesday).

"This guy is never in doubt but frequently in error." -Xenia, Ohio on Saturday.

Meantime, as Election Day nears, Kerry has toughened up his criticisms of Bush, though he has also occasionally fallen back into his habit of being overly windy in his remarks. For instance, late last night upon arriving in Waterloo, Kerry kicked off a rally at the airport with a bang only to talk a bit too long.

"So 14 days from now, 14 days from this very moment, Americans will have been to the polls and I know that you came here tonight to give George W. Bush his two-week notice," exclaimed Kerry at the top of the rally.

Shortly thereafter, Kerry wound up drifting, even after promising 16 minutes into the event that he would wrap up his remarks as an audience member became woozy. While the man was being tended to, Kerry told the crowd he was going to "wind up ... because I don't want to keep everybody late." It eventually took him over six minutes of winding to finally "wind up," though several audience members wound up walking out, choosing not to wait for the end.

Later today, Kerry heads to Pittsburgh for a rally at Carnegie Mellon University, then he drives to the Mahoning Valley in Eastern Ohio where he's scheduled to go duck and geese hunting on Thursday morning.
--Steve Chaggaris

It would seem that the campaign may have even learned some strategy from Edwards' Manchester town hall last month. Upon hearing 9/11 widow Kristen Breitweiser speak at the event, 84-year-old Fran Gordon took the microphone and suggested the campaign take advantage of the well-spoken woman's reasons for supporting Kerry/Edwards by way of a campaign ad. A commercial featuring Breitweiser was released by the campaign Tuesday.

Tuesday's Granite State town hall marked Edwards' final one as Democratic candidate for vice president. According to spokesman Mark Kornblau, "John Kerry and John Edwards over the last two years have held hundreds if not thousands of town hall meetings, front porch discussions, and living room chats. In the next two weeks they're going from town to town holding rallies and fighting hard for every last vote."

Edwards took that fight through Wisconsin and Minnesota Tuesday, where he played to local issues, offering support for dairy farmers in Eau Claire, Wisconsin, and promising to enforce the right to hunt and fish and the ability snowmobile in national parks in Hibbard, Minn.

Edwards also tried to make national news when he responded to Dick Cheney's remarks that terrorists might use nuclear weapons on U.S. cities. Using the remark as proof that the administration has been "incompetent" in its handling of the war on terror and homeland security, at his Wisconsin rally Edwards said, "They're great at their words, they're not great at doing what needs to be done."

Making what was likely his last stop in Minnesota before Election Day, Edwards hit Hibbard in the state's Iron Range, where he was joined by former Vice President Walter Mondale, who took a jab at current VP Dick Cheney. "I don't want to pick on him, but he is sour and negative and backward looking-and what is worse is he's using my office in the White House and I want to get somebody good in there," Mondale said to a crowd of more than 5,000. The crowd concurred.

Campaign officials say Edwards' itinerary for the next 13 days will focus on Florida and Ohio, two states critical for a Democratic victory, as well as events in Iowa, Pennsylvania, and Wisconsin. It's unlikely Edwards will return to West Virginia as sources say it will be a difficult victory.
--Bonney Kapp

Vice President Cheney has altered his stump speech slightly this week to address some specific accusations by John Kerry. While he has done this in the past to repudiate arguments and statements put forth by the senator, what has developed this week is less rhetorical campaign debate and more along the lines of mocking ridicule.

Cheney acknowledges two accusations by Sen. Kerry in the last few weeks - the potential for the draft and the loss of Social Security - and almost welcomes their inclusion into the political discussion. It gives him a chance to pigeonhole the Democrats as being desperate and unoriginal.

"I have trouble remembering elections when there wasn't an effort down in the closing days for the opposition to try to scare everybody by saying, 'Oh my gosh, if you elect a Republican, something bad is going to happen to Social Security,'" he said after ticking off the litany of state and national elections he's participated in.

"It's a myth. It's absolutely wrong. It's, I think, a move of desperation on their part to suggest that. It's the kind of scare tactics we've heard so often in the past," he concluded in Carroll, Ohio on Tuesday.

The same deriding tone was present at a rally in Xenia, Ohio, only this time Cheney was addressing the illusion of required military conscription.

"He (Kerry) will try to scare young people by raising the specter of the draft when he knows the only people who are in favor of bringing it back in his own party," Cheney said referring to the legislation introduced by Democratic Rep. Charles Rangel. "And this past week when the House was given an opportunity to vote on reinstating the draft, the vote was overwhelmingly against it, over 400 No's and two votes for it, both Democrats."

Of course, the vice president isn't beyond trying to scare an audience either. For weeks, he's attempted to describe the ultimate goal of a terrorist and how his administration has come to except it.

"We've since come to understand that the biggest threat we face now as a nation is the possibility of terrorists ending up in the middle of one of our cities with deadlier weapons than have ever been used against us, with a biological agent, or a nuclear weapon, or a chemical weapon of some kind, able to threaten the lives of hundreds of thousands of Americans, not just 3000," he often says alluding to the number of people killed on 9/11.

How well these scare tactics influence voters will be seen on the first Tuesday in November. But possibly the most frightening aspect of the vice president's rallies is his handlers' insistence that he enter the arena to the tub-thumping beats of 2 Unlimited's "Get Ready for This." The mid-90's electronic dance song (a staple of high school pep rallies and cheerleading routines) would probably be better served introducing the starting front line of a minor league hockey team than the second most powerful man in the world.
--Josh Gross