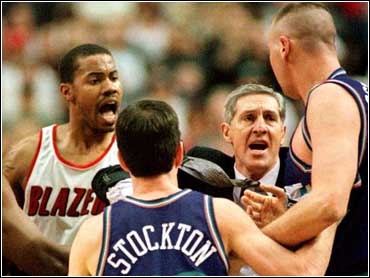 The Utah Jazz can flail and fume, but they just can't push the Portland Trail Blazers around anymore.

Arvydas Sabonis and Rasheed Wallace each scored 17 points as the Portland Trail Blazers withstood a tumultuous fourth quarter to beat the Utah Jazz 101-92 Sunday for their 11th straight win.

"You know what's going to happen with Utah: There's going to be a lot of pushing and shoving, a lot of flopping," Portland's Detlef Schrempf said. "We let them get back a little closer than we wanted, but we got the W."

Steve Smith added 16 points and Damon Stoudamire had 15 for the Blazers, who have won 17 of 18 overall and 16 straight at home.

As the final seconds ticked off, the sellout crowd chanted "Beat L.A.!" The Blazers play host to the Los Angeles Lakers on Tuesday in a showdown between the teams with the league's best records.

"This was the perfect way for us to get focused on the Laker game," Stoudamire said. "This should be a carryover to the Tuesday night game. We're just going to let it all ride on Tuesday."

Counting last year's playoff series win, the Blazers have beaten the Jazz nine out of the last 10 times at the Rose Garden. Portland leads the season series 2-1, and the play one more time April 10 at Utah, where the Blazers have lost 12 of their last 13.

Karl Malone and Bryon Russell scored 23 points each to lead Utah. But it was Malone's physical play in the fourth quarter that stirred up the Blazers and started the Jazz unraveling.

Utah closed to 82-79 on a dunk by Greg Ostertag with 7:58 to go, but after a turnover Malone got tangled up with Portland's Bonzi Wells and threw him to the floor. Wells jumped up and bumped Malone in the chest, and the two were quickly separated.

"That was a tryout for the WWF, that takedown," Blazers coach Mike Dunleavy said of Malone's move.

Both were assessed a technical foul, and the Blazers got a jumper from Greg Anthony and a putback by Wallace to take an 86-79 lead with 5:31 left.

A short time later, Ostertag was ejected after a tussle with Smith. Ostertag thought he was fouled by Smith, and the two glared at each other.

They exchanged words, then Ostertag grabbed onto Smith. Teammates, coaches and officials immediately jumped in, and the two were separated after Smith had his hands around Ostertag's face and neck.

"We just hooked up. He didn't want to let it go," Smith said. "He gave me a stare, so I started laughing."

Ostertag had gotten a technical in the second quarter for angrily bouncing the ball, and his second earned him an automatic ejection.

"We need Greg. We also need him intense," Utah's John Stockton said. "It's a fine line. Be intense, but be in control of your emotions."

Smith's jumper with four minutes left made it a 10-point lead, but he fell backwards over Stockton, and was helped off the court with a slightly sprained left foot.

The rough play in the fourth quarter was absent for much of the game, as the teams battled from the perimeter. Portland, leading the NBA in field goal shooting at 47 percent, shot nearly 49 percent and made 8-of-15 from 3-point range.

The Blazers also outrebounded Utah 41-29, and on one sequence in the first quarter, Wallace got three offensive boards before getting his shot to fall.

"They were ignited when we got here. They were alive," Utah coach Jerry Sloan said. "They kicked our butts right from the beginning. They let us know how they were going to play, and they had that all day long."

The Blazes led by as many as 14 in the third, but a 3-pointer by Russell cut the lead to 75-70 with 35 seconds left. Scottie Pippen's 3 with 26.1 to go put Portland ahead by eight heading into the fourth.