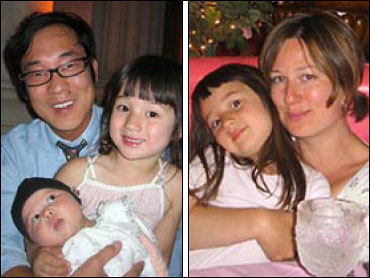 A San Francisco man who got stranded in the snowy wilderness with his family nearly two weeks ago was found dead Wednesday in a mountain creek, authorities said.

James Kim's body was discovered about seven miles from his car in Oregon's snowy Klamath Mountains, two days after his wife and two daughters were rescued from the vehicle, stuck on a remote road. Kim had set out on foot over the weekend to find help.

Kim's body was at the foot of the Big Windy Creek drainage, a half-mile from the Rogue River, where ground crews and helicopters had been searching for days.

A tearful Undersheriff Brian Anderson announced the discovery of the body, his voice breaking at one point.

"He was very motivated," Anderson said. "We were having trouble in there. He traveled a long distance."

He said he had few details about Kim's condition or the immediate area where he was found.

The body was to be taken to the town of Central Point for an examination.

Earlier in the day, searchers said they had uncovered clues that suggested Kim had shed clothing and arranged it to give searchers clues to his whereabouts. They had also made plans to drop rescue packages with clothing, emergency gear and provisions.

Kim, 35, was a senior editor for the technology media company CNET Networks Inc. He and his family had been missing since Nov. 25. They were heading home to San Francisco after a family vacation in the Pacific Northwest.

Kim's wife, Kati, told officers that the couple made a wrong turn and became stuck in the snow. They used their car heater until they ran out of gas, then burned tires to stay warm and attract attention. With only a few jars of baby food and limited supplies, Kati Kim nursed her children.

Roads in the area are often not plowed in the winter and can become impassable.

Technology, some lucky text messages and an outdoorsman's intuition helped locate Kati Kim and her daughters.

Searchers rescued Kati Kim, 30, and her daughters Penelope, 4, and Sabine, 7 months, along a remote forest road Monday afternoon. The key to finding them, police said, was a "ping" from one of the family's cell phones that helped narrow down their location. Though cell phone signals are rare in the area, reports CBS News correspondent Blackstone, the family's phone connected briefly to a distant tower as it received a text message. That gave searchers a place to look.

According to one of two cell phone engineers who honed in on the Kims, the chance of the split-second signal making it through the rugged mountains was "very slim."

"It was just a hunch that we could help. And we followed up on the hunch," said Eric Fuqua, 39, an engineer for Edge Wireless LLC who contacted authorities to offer his services in the search. Edge Wireless provides cell phone coverage in southern Oregon, and is a member of Cingular Wireless' network.

Fuqua and co-worker Noah Pugsley started digging through computer records of cell phone traffic Saturday and learned that one of the Kims' cell phones had received two text messages around 1:30 a.m. on Nov. 26, the day after the family was last seen at a restaurant in Roseburg, Ore.

The engineers were able to trace a "ping" from the Kims' phone when it received the text messages. They located not only the cell tower in Glendale, Ore., from which the messages were relayed, but a specific area west of the town where the phone received them.

With the family's possible location narrowed down, the pair used computer software to create a map predicting what parts of the mountainous region received any cell phone coverage at all.

Fuqua then relied on his extensive experience traveling the heavily forested back roads as both a fisherman and a technician, he said, to guess the course the family may have taken as they headed from the mountains toward the coast.

Kati Kim and her daughters were found with their snowbound car just off that road, which Fuqua called "impossible" terrain to navigate for anyone with no knowledge of the area.

The complicated network of roads in the area is commonly used by whitewater rafters on the Rogue River or as summer shortcuts to Gold Beach — the Kims' destination when they went missing. The roads are not plowed in winter.

Searchers were lucky that the Kims received a cell phone signal at all in an area with "very, very sparse coverage," Fuqua said. "Every now and then, if you go slow enough, you'll hit our towers for just one second in that one spot," he said.

Details of the contents of the text messages and who sent them have not been released.

But law enforcement officials said the engineers' analysis of the messages was the critical breakthrough that searchers needed to ultimately spot three of the Kims by helicopter as Kati Kim waved an umbrella marked "SOS."

"From what I understand about (Fuqua's) help in this case, as far as I'm concerned he's a hero to me," said Inspector Angela Martin, who led the San Francisco police's investigation into the Kim's disappearance.