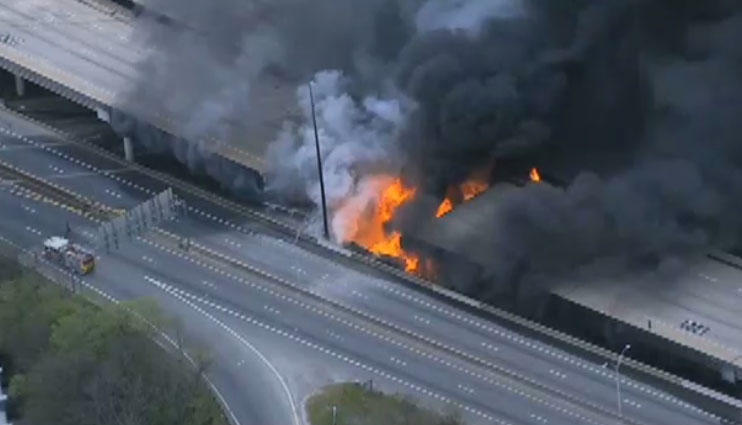 ATLANTA -- Atlanta’s notoriously tangled commutes were thrown into disarray Friday after a bridge on Interstate 85 collapsed amid a massive fire, shutting down the heavily traveled highway through the heart of the city.

Traffic was bumper to bumper on nearby streets as people scrambled to find alternate routes after the fire broke out during rush hour Thursday afternoon. However, officials said no one was hurt despite towering flames and plumes of smoke captured in dramatic video footage.

The interstate, which carries 250,000 cars a day, is a major artery for the South and a thoroughfare for traffic heading north and south through Atlanta. Many commuters in some of Atlanta’s densely populated northern suburbs will likely be forced to find alternate routes or ride public transit for weeks or even months.

“This is about as serious a transportation crisis as we can imagine,” Atlanta Mayor Kasim Reed said. The bridge collapse effectively “puts a cork in the bottle,” Georgia State Patrol Commissioner Mark McDonough said.

Georgia’s top transportation official said there’s no way to tell when the highway can be safely reopened to traffic in either direction.

“We will have to continue to evaluate the situation and adjust as we do,” Department of Transportation Commissioner Russell McMurry said. “This incident - make no bones about it - will have a tremendous impact on travel.”

“The quick release of these funds will help to ensure the bridge is repaired safely and in a timely manner to prevent any further disruption to the hundreds of thousands of people who travel it on a daily basis,” Transportation Secretary Elaine Chao said in a statement announcing the funds.

Atlanta Fire Department spokesman Sgt. Cortez Stafford said no cars were on the overpass when it fell.

“Our guys got here quickly and shut down the interstate and said, ‘No one else is driving over this bridge,’” he said.

Firefighters noticed chunks of concrete falling from the bridge and got out of the way just minutes before it collapsed, Stafford said.

The Atlanta Journal-Constitution reported flames burned for more than an hour under I-85 northbound near Piedmont Road, spewing clouds of black smoke skyward.

CBS Atlanta affiliate WGCL-TV reported that “Miles of cars were stopped on the bridge just yards from the collapsed section. Eyewitnesses reported seeing some people getting out of their vehicles and leaving them on the road, opting to walk to nearby areas.”

However, officials said no one was hurt despite dramatic images of towering flames and plumes of smoke.

Connie Bailey-Blake of Dacula, 37 miles northeast of Atlanta, was catching a MARTA commuter train Friday morning to reach her job in downtown Atlanta. She typically drives 46 miles to work, often using the interstate.

Bailey-Blake said: “The first few days are going to be difficult.” She arrived at the train station at 9:15 a.m. - 15 minutes past when her work day was supposed to start.

Amelia Ford, who lives in Atlanta, opted to find another route to work by car Friday said it took her 45 minutes to travel 3 miles from her home to the nearest open interstate exit. She said other drivers were being “surprisingly, pretty patient.”

Capt. Mark Perry of the Georgia State Patrol told the newspaper the agency doesn’t know what started the fire beneath the bridge but terrorism isn’t suspected.

Deal, the governor, told reporters some PVC plastic materials in a vehicle may have caught fire.

“I do not know why they did or what the source of their transport was,” Deal said Thursday. “But those are questions that will hopefully be answered at least by tomorrow morning.”

Though the material burned was plastic, officials said there was no danger of particles in the air to the public, the station says.

Deal said inspectors were at the scene and they’ve contacted the original company that built the bridge to come in and assess the extent of the damage.

“We’re trying to determine everything we can about how quickly can we repair it and get it back in service,” Deal said. “I can assure you we will do everything to expedite the repair and replacement of that section of the bridge.”