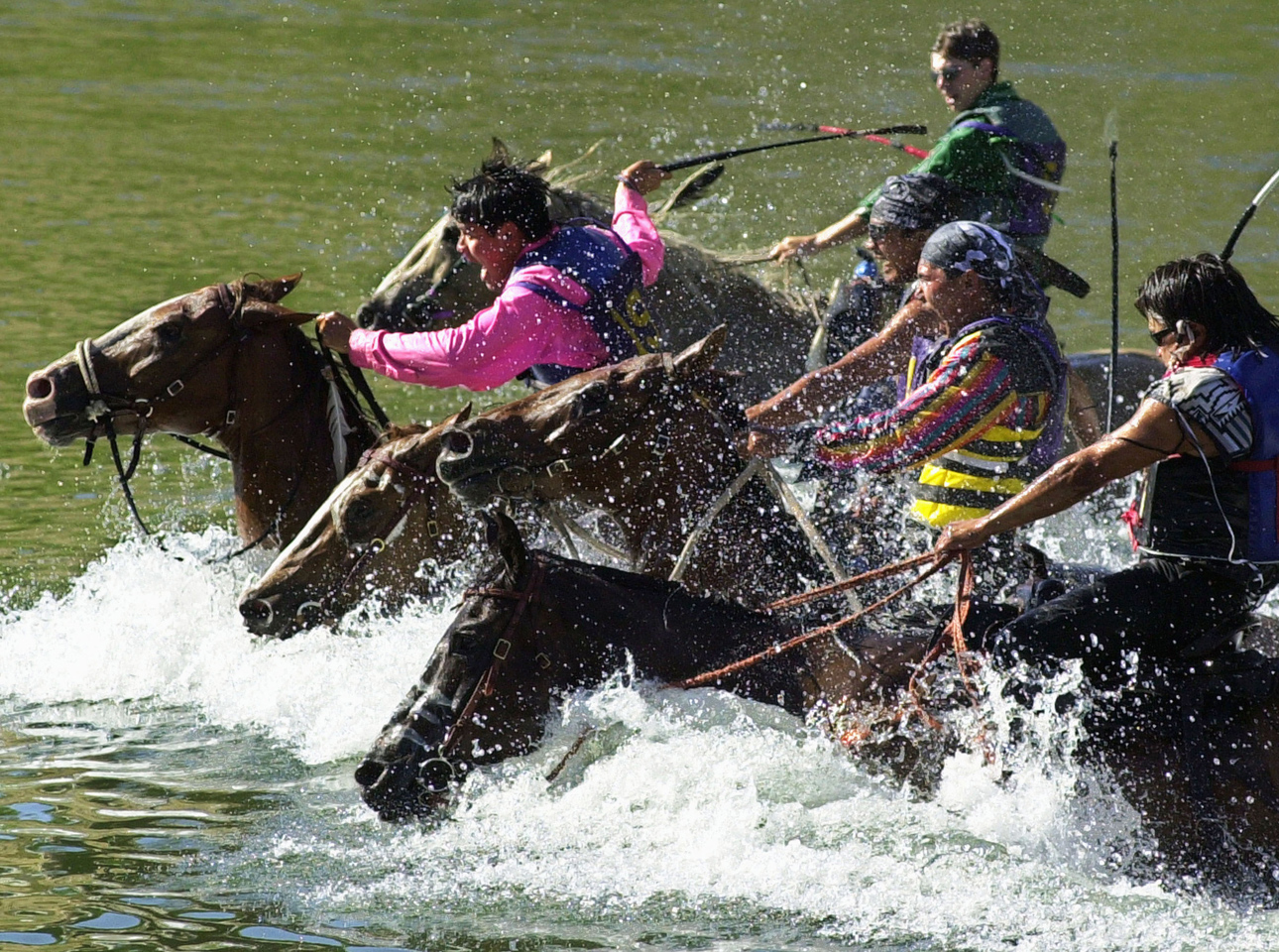 Warning: The above video contains content some may find disturbing. Video provided by The Humane Society of the United States shows footage from the 2005 and 2006 Omak Suicide Races in Washington State, in which some horses running down a steep hill stumble and fall.

(CBS News) This weekend, as it has for nearly 80 years, the rodeo in Omak, Washington will attract thousands of residents and tourists to its city to watch up to 20 jockeys and their horses sprint down a steep embankment and into the water.

Fans of the "World Famous Suicide Race" call it an adrenaline-pumping tradition that brings the community together. Animal rights activists and others, however, cringe watching the equines plummet into the river down a 210-foot-long, 62-degree slope called Suicide Hill, the dust kicking up behind them as onlookers cheer.

Organizers of the Suicide Race are used to defending the tradition shared with the Colville Native American tribe. An estimated 23 horses have died since 1983, according to the Humane Society of the United States, including one this week.

A six-year-old thoroughbred named Little Big Man, owned by Jerry Ford and ridden by Jason Muesy of the Spokane Indian Reservation, broke his leg while struggling to keep his footing in the water during a qualifying race. He ultimately went under water "and surfaced downstream," according to a statement by the Suicide Racers Owners and Jockeys Association.

But the association determined the course was safe and continued with qualifications and a race on Thursday night.

Wayne Pacelle, President and CEO of the Humane Society, likened the Omak Suicide race to dogfighting and cockfighting - both of which are illegal in the United States but attract tourists in other countries.

"It's just one of these microcosms of cruelty that exist in the world," he said.

The Suicide Race dates back to 1933, when two Okanogan County stockmen began a rodeo as a way to attract business to their town. The race, inspired by Indian endurance races in the neighboring Colville Indian Reservation, was a way to drive more people to the rodeo show.

The evening Suicide Race remains the main attraction of the four-day festival that takes place during the second week of August, attracting people from as far away as Israel. Defenders of the race generally respond to critics with two arguments: the event is a tribute to the area's Native American heritage that brings the community together and the race is safer than people think.

The Owners and Jockeys Association said it was "traditionally done as a rite of passage" and "a demonstration of our young warriors and their horses' ability to become one." Horses are adorned with paint, feathers, and other Native American symbols. There is an opening prayer before the race.

Ronda Lemmon, a registered nurse, is one of 120 volunteers and feels passionately enough about the rodeo to have dedicated her time toward it for over 20 years. "The Colville tribe is very sensitive and very concerned," she said. "Their horses are like family."

City officials also maintain the event is important for community building and deny it's a form of animal abuse. Omak City Administrator Ralph Malone insists the horses are cared for with respect and must be "willing to go down the hill they go down independently" in order to be sent down it carrying a rider.

"[The race] has been a part of my life for 50 some years. While yes, there is risk involved with it ... they are extremely valuable animals," Malone said. "Proper treatment of them is taken very seriously. We did lose a horse during practice this year and everyone's saddened by it. However, if you compare this particular race even to other forms of horse racing, I don't think you find it significantly worse or different."

But not everyone agrees. Dr. Heather Evergreen, an equine veterinarian in Monroe, Wash., who witnessed a 2006 race, wrote on behalf of the Humane Society that "if they truly cared about their horses ... their horses would be at home safe in their paddocks eating their dinner, not here tied to a horse trailer awaiting significant trauma, injury, or even death."

Animal activists also doubt the fact that horses are ever "willing" to go through with the suicide race. Horses are big powerful animals with thin legs that buckle and break as they're charging down a steep hill, Pacelle described.

"There are people who do extreme sport. Ultimately it's their choice," Pacelle said. "It's not the choice of the horse and they're forced to participate."

The Humane Society said it doesn't have access to official death records, but reached the count of 23 deaths from media reports over the years. It is unknown how many horses died during training, the practice trials or after the race.

A Wall Street Journal reporter witnessed a horse break its back and be euthanized in 2007. According to the Humane Society, two horses died in a collision and third died after the race in 2004. In 2002, one horse drowned in a practice run and another was euthanized after a collision.

In her testimony, Evergreen wrote the Suicide Race has obvious risks: the risk of running full speed with a large group of horses, the risk of landing the initial jump off the top of the hill, going down the steep hill, and the possibility of drowning in the water - like Little Big Man.

Lemmon, the volunteer, still insisted that the race is not as scary as it looks. She said horses are thoroughly prepared and that there are rescue boats and ambulances on both sides of the river and in the arena.

There are only 15 participants this year, Lemmon said; some jockeys pulled their horses from the race because the river was a little high.

Over the years the Humane Society has approached local council members and tribal leaders in an effort to make the Suicide Race history, but without much success.

While the Suicide Racers and Owners Association insists the race "has never been about stardom, money or glory," Humane Society's Washington State Director, Dan Paul, said he believes "economic benefits to the region" have "likely trumped these officials' interests in the welfare of horse."

Organizers said they are set on keeping their tradition just the way it is - name and all.

"It's definitely intense, that's all I can say," said Lemmon. "I get excited every year. I literally get chills every time I see it, when I see it."