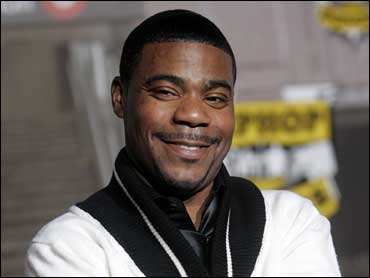 Nearly one year to the day after his last DUI arrest, Tracy Morgan has been picked up again for allegedly driving while drunk.

The 38-year-old comedian was stopped around 4:30 a.m. while driving a Cadillac Escalade on the Henry Hudson Parkway near West 158th Street, said Edison Alban, a spokesman for District Attorney Robert Morgenthau.

Police reported that Morgan smelled of alcohol and that he later failed a breathalyzer test at the 28th Precinct stationhouse, Alban said.

A rep for Morgan told The ShowBuzz Tuesday, "we have no formal statement at this time."

Last Dec. 2, Morgan was arrested in Hollywood on impaired driving charges after police stopped him for speeding. Authorities there said his blood-alcohol level was 0.13 percent, over the legal limit of 0.08 percent.

On Feb. 17, he pleaded no contest to a misdemeanor charge of drunken driving and was sentenced to 36 months' probation, fined $390 and ordered to attend an alcohol education program, authorities said.

Morgan was a "Saturday Night Live" cast member from 1996 to 2003. He left the show to star in his own now-cancelled "The Tracy Morgan Show," and is currently in "30 Rock."