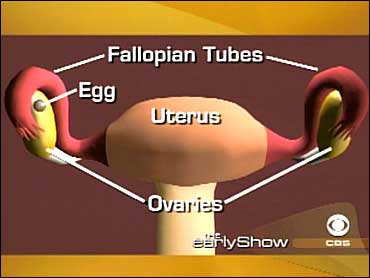 Researchers in Scotland say they've developed a computer program that can predict how long a woman's biological clock will keep ticking.

Through a complicated mathematical equation, doctors have a way to predict a woman's remaining reproductive years, explains Dr. Owen Davis, a fertility specialist at the Weill Medical College of Cornell University on The Early Show.

"Basically, age affects fertility fairly profoundly. A woman, as she becomes older in terms of her chronological age, has reduced fertility," Dr. Davis says. "They've taken data showing how many eggs, on average, a woman has at a given chronological age and they have taken ultrasound data - studies looking at the size of a woman's ovaries as she ages - which basically showes as a woman gets older, her ovaries shrink. They put the two pieces of information together and come up with one formula, where a woman could theoretically be examined, you could measure her ovaries with ultrasound, plug in her chronological age, and then tell her what her reproductive age is. In other words, how many years does she have before menopause? What is her fertility potential?"

The method could help with the treatment of women seeking assisted conception, those who have had treatment for childhood cancer or women who wish to delay a family for personal or professional reasons.

Dr. Davis notes, "I think the study has proven to be correct and accurate. It will be a very useful test. But I wouldn't advise people to get this test right now. Right now, it's purely theory. It's intriguing, interesting, but studies have to follow up to make sure the predictions are accurate. If they're claiming they can predict how many years a woman has before menopause, they have to do the study, follow up and see when, in fact, they do have menopause."

In theory, women from the ages of 25-50 could be able to find out how many fertile years they have left by having a simple ultrasound scan to check the health and the size of the ovaries.

Using further mathematical and computer analysis, the formula can determine when the ovaries are likely to stop producing eggs. The age of menopause varies from woman to woman and there is currently no reliable test for a woman that will predict accurately her remaining reproductive life-span.

Dr. Davis notes, "If you tell a woman she has 12 years before menopause, that doesn't mean 12 years of opportunity to become pregnant because a woman's fertility declines steeply even a decade beforehand."

And there are factors, like smoking, that can hasten the onset of menopause, Dr. Davis says.

On average, females begin with a few hundred thousand cells and usually, by the average menopause age of 50, the number decreases to just 1,000, which is not enough to generate eggs. The key to the method lies in the mathematical modeling of the ovaries, so that the size and number of cells can be calculated. The researchers say that ultrasound is an ideal method, because it is safe, non-destructive and relatively cheap.