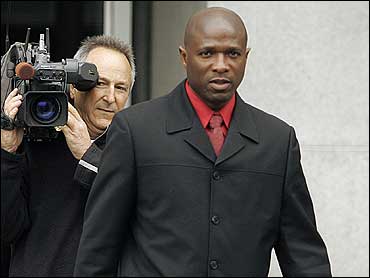 Track coach Trevor Graham was found guilty Thursday of one count of lying to investigators about his relationship to a steroids dealer. Jurors could not reach a verdict on two other counts.

Graham is the second figure arising from the Bay Area Laboratory Co-Operative doping scandal to get convicted at trial. Former cyclist Tammy Thomas also was found guilty of lying to a federal grand jury when she denied taking steroids.

Graham was charged with three counts of lying to two IRS agents about his relationship with Angel "Memo" Heredia, a Laredo, Texas, discus thrower who bought performance-enhancing drugs in Mexico and sold them to many star track athletes.

In an interview in North Carolina in June 2004, Graham denied setting up his athletes with drugs obtained from Heredia, said he had never met Heredia in person and that he last contacted Heredia by phone in about 1997.

The jurors convicted Graham on the charge relating to the phone calls but a mistrial was declared on the other two. Prosecutors can choose to retry Graham on those charges, but had no comment Thursday on what their next move would be.

Graham's attorney William Keane had portrayed his client as "the original whistleblower in BALCO" who was made a scapegoat by some of the athletes he used to train. But prosecutors countered that Graham only sent federal doping officials a vial of then-undetectable steroid, "the clear," in 2003 because he was "diming out another drug dealer."

Investigators traced the syringe back to BALCO and used that information in a search warrant that helped determine that the company was distributing performance-enhancing drugs to numerous elite athletes in baseball, track and field, football and other sports.

Federal prosecutors also have charged ex-San Francisco Giants slugger Barry Bonds with lying to a federal grand jury about his alleged steroid use.

Who gets Armstrong's stripped Tour titles?

All-Star round-table: 25 years of the WNBA