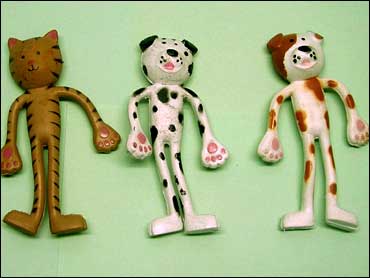 A Wisconsin company is recalling thousands of bendable cat and dog toys given out by libraries across the country to student readers because the toys were contaminated with more than four times the safe amount of lead.

The American Library Association's Web site calls it "a toxic toy alert" and it reached all the way to Alaska.

The library in Pueblo, Colo., learned of the problem from ALA and contacted Highsmith of Fort Atkinson, Wis. "We contacted them earlier this week and they e-mailed us a release about the recall," said Jon Walker, district director of the Pueblo Library.

"We have been calling the families and encouraging them to bring the toys back and we will give them a replacement prize," said Walker. The toys were awarded for completing a student reading program.

The American Library Association Web site said, "A serendipitous conversation during a summer-reading promotion between an Indiana children's librarian and a staff member of Bloomington Hospital has triggered the recall of thousands of toys containing hazardous lead levels that libraries nationwide were giving out to children as program incentives."

No one from Highsmith was available to comment Saturday.

Matt Moulder, spokesman for the company, told the Springfield, Ohio, News-Sun last week that libraries in as many as 41 states had bought the Chinese-made toys as part of the prepackaged "Paws, Claws, Scales, and Tails" summer reading program.

The company sent out a statement by e-mail saying:

"Highsmith has recently had a lead content test completed on a sample of the Bendable Cat and Dog toys sold to public libraries through the Collaborative Summer Library Program. This test, completed by Analytical Process Laboratories Inc., Milwaukee, Wis., confirmed an earlier report from the Indiana Board of Health that the lead content in these particular toys exceeds the maximum allowable limit under current federal regulations."

The statement continued: "The sample Highsmith tested registered .277% lead content. The Code of Federal Regulations, Title 16, Section 1303 stipulates that lead may constitute no more that .06% of the weight of the paint applied to a toy."

The California Library Association, on its Web site, advised libraries to stop distribution of the toys. "Highsmith takes this safety issue very seriously," the note said.

The Pueblo Chieftain reported that 1,600 toys had been distributed in its library district. "They were probably given out at hundreds of libraries across the country," said Midori Clark, Pueblo library spokeswoman.

The toys, slightly less than four inches long, are small enough to be sucked or chewed on by a child, said Richard Leiker of the Oregon Department of Human Services Lead Poisoning Prevention Program.

The children's librarian in Ripon, Wis., said the toys were popular and all of them were given out.