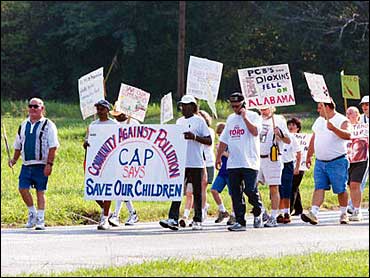 Imagine a place so saturated with toxic, cancer-causing chemicals that it's in the dirt people walk on, the air they breathe - even the blood that pumps through their veins.

The 24,000 people living in Anniston, Ala., don't have to imagine this. Many of them are living it. In fact, they have been living it for decades - they just didn't know it. The company responsible didn't tell them, and neither did the Environmental Protection Agency.

60 Minutes aired this story last November, and just last week there was a major development.

Monsanto and its corporate spin-off, called Solutia, agreed to pay $700 million in damages and clean-up costs to the community. Correspondent Steve Kroft reports.

Today, parts of Anniston are so contaminated that residents have been told not to grow vegetables in the soil, kick up dirt, eat food, chew gum or smoke cigarettes while working in their yards.

"Our children have to play in the streets, on the sidewalks, because they can't play in the grass because it's contaminated," says resident David Baker.

"We have to wear masks if we cut our grass. Where else in the United States of America are people doing that?"

The problem is polychlorinated byphenyls - PCBs - one of the most pervasive and profitable industrial chemicals of 20th Century America.

They were used as insulators in electric transformers, and mixed into everything from paint to newsprint.

They were invented in Anniston in 1929 and manufactured here by Monsanto for almost 40 years - a source of wealth and jobs until the 1970s, when it became clear that PCBs were doing more harm to the environment than good for industry.

They were banned in 1979, but the people here are still living with the legacy.

"In my judgment, there's no question this is the most contaminated site in the U.S.," says Dr. David Carpenter, a professor of environmental health at the State University of New York in Albany.

Carpenter has testified against PCB-makers and says every national and international health agency in the world lists PCBs as a probable human carcinogen.

"Within the objective scientific community and within the government bodies, there is no debate at all."

PCBs were so widely used and last so long that almost all of us have minute levels in our bloodstreams. But those who live in West Anniston, the area closest to the plant, have some of the highest PCB levels in the word. Anything above 1.5 parts per billion is considered unusual.

As a result, approximately 20,000 current and former residents of Anniston have joined five different lawsuits against Monsanto for polluting their community, threatening their health and destroying their property.

Monsanto dumped tons of raw PCBs directly into Snow Creek which runs by the plant. Five thousand additional tons are buried in a hillside and Baker believes they're still giving off fumes.

Baker and 3,500 other plaintiffs are being represented by Donald Stewart, an attorney and former U.S. Senator who lives in Anniston.

"At no point in time did the company ever inform the people in that community about the problems they were facing," says Stewart. "My suspicion is that they knew that one day we would be in the situation we're in right now. The internal documents indicate that they knew they had tremendous liability there at that plant site."

Stewart uncovered close to a million pages of company documents that show Monsanto knew PCBs were a problem as early as 1938 - when scientists hired by the compay reported that rats exposed to the chemicals delivered liver damage. By the 1950s, Monsanto was urging its own workers to wear "proper protective clothing" and "respiratory equipment" when handling PCBs. Many of the documents dealing with PCBs or other pollutants were marked "Confidential: Read and Destroy."

"They were warned by the people who did those tests that they should warn their neighbors because children and animals might be affected by what was being released from their plant," says Stewart.

In 1969, Monsanto created a high level PCB Committee, whose mission was to "protect the image of the corporation" and "permit continued sales and profits." Even they concluded that PCBs will someday become "a global environmental contaminant." But no one let the community know the extent of the problem and little was said about it in the press.

In fact, people in Anniston might never have known about the contamination if it weren't for a man with the Soil Conservation Service, who pulled a badly deformed largemouth bass out of Choccolocco Creek in 1993. Instead of throwing it back, he decided to send it off to an independent lab for analysis, and discovered that the fish was loaded with PCBs.

By that time, the contamination had spread 40 miles downstream. The State of Alabama put out warnings not to eat local fish. And about the same time, Monsanto began quietly buying property in West Anniston, bulldozing houses and fencing off the land. Parts of the neighborhood looked like a ghost town.

Before last week's agreement, Monsanto had settled three lawsuits for nearly $80 million. And last year, they lost the first round in a major court case against Donald Stewart and his clients.

After a six-week trial, an Alabama jury found that Monsanto had engaged in outrageous behavior, and held the corporations and its corporate successors liable on all six counts it considered - including negligence, nuisance, wantonness and suppression of the truth.

John Hunter is a longtime Monsanto executive and now the CEO of Solutia which is what Monsanto's old chemical business is now called. Monsanto spun it off into a separate company in 1997, just as the lawsuits were getting under way.

"What I do know is that we're committed to cleaning up the PCBs," says Hunter. "I understand the concerns of the Anniston community. And, if you're asking me, do I wish that things might have been done differently in the past than they were? Sure I do."

But the residents of Anniston are also angry with the EPA, which was aware of the contamination since the 1970s, but never warned the community.

"I do think that if we had known that the contamination was as widespread as we now believe it to be, there were additional measures that we could have taken, and probably should," says Stan Meiberg, the EPA's deputy regional administrator for the Southeast.

"We absolutely understand the concerns that people have in Anniston. And one of the things that has occurred in this is we have learned from the community."

But that's up for debate. Last summer, when it looked like an Alabama judge might order the company to remove all the PCBs from Anniston, the EPA stepped in and signed a consent decree with Solutia giving the company two more years to study the problem - and then propose its own clean up.

But why give them the benefit of the doubt and allow them to decide what needs to be done?

"Any actions that will be taken on what's going to be done will have to have the approval of the EPA," says Meiburg. "Our job is to oversee, to verify, to use the enforcement tools that we have to make sure tha the clean up proceeds in the way it should."

Solutia says it's already spent more than $50 million on the clean up. Using its own measurements and EPA standards, it doesn't believe Anniston residents are being exposed to what it calls "significant levels" of PCBs.

"We've sampled over 1,000 residential properties. And only 24 of those are required for immediate action," says Hunter. "Unfortunately, the lawyers for the plaintiffs are advising the property owners to deny us access for the property. So, we stand there ready to clean up those properties and can't do it for that reason."

"We want our clients' property completely cleaned," says Stewart. "We also want our folks to do the testing ... We don't trust Monsanto's test."

But Hunter thinks the best way you can judge someone's words is to watch their actions: "I would hope that they would look at Solutia for what Solutia is doing now."

What Solutia and Monsanto are doing now is paying $700 million to settle all the cases against it - $600 million will go to residents and $100 million will help pay for the clean-up.

Solutia CEO John Hunter says the legal battles were exhausting the company's resources, but he admitted no wrong-doing on Solutia's part. He insisted there is no conclusive evidence linking long-term PCB exposure to human disease.

But as part of the settlement, the companies did agree to fund a medical clinic and PCB research center to help residents of Anniston deal with their chronic health problems.

9/25/2022: The Secretary of State, Inside the Committee, Rescuing Reefs

See who's watching you online
Thanks for reading CBS NEWS.
Create your free account or log in
for more features.
View CBS News In
CBS News App Open
Chrome Safari Continue
Be the first to know
Get browser notifications for breaking news, live events, and exclusive reporting.