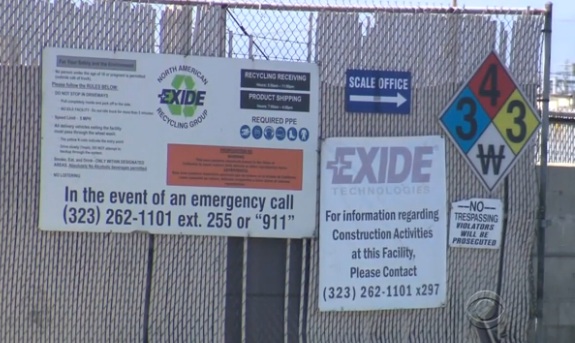 LOS ANGELES -- On Wednesday, Governor Jerry Brown asked the California legislature for $176 million to clean up a toxic mess near Los Angeles.

The Exide Battery Recycling plant shut down in 2014, but left dangerous levels of lead in the soil.

Amelia Vallejo no longer allows her children to play in their yard.

"Before my kids would play on the ground," she said. "They would roll over on the grass. I didn't know I was harming my kids."

Her home sits a mile north of Exide Technologies where, according to state environmental agencies, smoke stacks were spewing dangerous levels of lead and arsenic particles into nearby communities for years.

Vallejo's property tested positive for lead at 1,500 parts per million, which is above levels for hazardous waste by California state standards.

Several members of her family suffer from serious health conditions often associated with lead poisoning including her 5-year-old disabled son.

"I feel like my whole family has been taken advantage, but yet, we are not getting the proper help, it's taking a bit of time, and once again, the damage has been done," she said.

During that time, the company was cited by California's Department of Toxic Substances at least 10 times and issued over $1.3 million in fines.

But last year, to avoid criminal prosecution, Exide made a deal with the federal government to shut down and set aside $9 million in a trust for clean-up.

Los Angeles County Supervisor Hilda Solis has been pushing the state to do more for months.

"I see this as a big environmental justice issue," she said.

She said today's $176 million plan is a start, but it may not be enough to make these families whole again.

State officials said this size of a clean-up could take a lot more than the $176 million, but they wont know an exact amount until they get started. The entire process could take several years to finish.