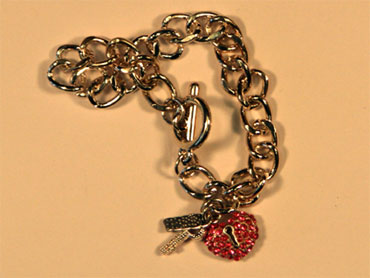 An international chain store says it will no longer sell a charm bracelet that lab testing reported by The Associated Press showed was laden with toxic cadmium.

In a statement, Claire's says it has no reason to believe that the product is unsafe, but is removing it "out of an abundance of caution."

Charms on the "Best Friends" bracelet contained 89 and 91 percent cadmium, according to testing organized by AP, and shed alarming amounts in a procedure that looks at how much cadmium children might be exposed to.

Claire's has nearly 3,000 stores in North America and Europe.

On the CBS "Early Show" Tuesday, consumer correspondent Susan Koeppen noted that Wal-mart, the nation's largest retailer, was taking some products containing cadmium off its shelves.

Manufacturers have been barred from using lead in children's products, such as toys and jewelry. And a new Associated Press investigation shows cadmium, an inexpensive, dangerous metal known to cause cancer, is being substituted for it.

Dr. Philip Landrigan, of the Department of Preventative Medicine at Mount Sinai Medical Center in New York, told CBS News, "It's a nasty toxic metal and, in my opinion, has no place in children's toys -- none."

The Associated Press bought more than 100 pieces of children's jewelry made in China and sold at Wal-mart and other retailers around the country. Twelve percent of the trinkets contained at least 10 percent cadmium, but Disney's "Princess and the Frog" pendants came in between 25 percent to 35 percent cadmium. In a Rudolph the Red-Nosed Reindeer charm, the level was 91 percent.

Dr. Jeffrey Weidenhamer, professor of chemistry at Ashland University, in Ashland, Ohio, called it "appalling" to find cadmium at those levels in products designed for children.

He added, "There's recent research indicating that it can cause learning disabilities and permanent loss of I.Q."

As part of the Consumer Product Safety Improvement Act, cadmium in paint is banned from children's toys, but the law doesn't address cadmium in jewelry, which is how these trinkets are reaching the market.

The CPSC issued a statement, saying the agency is now moving swiftly to prevent foreign manufacturers of children's jewelry from substituting high levels of cadmium and other heavy metals in place of lead. The CPSC, Koeppen observes, is also investigating the jewelry cited.

Hitchcock said, "American manufacturers, whether they make their product in Bayonne (N.J.) or Beijing, have a responsibility to keep toxic substances out of the hands of our children."

Koeppen added on "The Early Show" that Disney says it requires all its products to be tested and, says the "Princess and the Frog" necklaces were shown to be in compliance with all current safety standards.

Koeppen says the CPSC has suggested in the past that parents not purchase any metal jewelry for their kids.

How dog saliva turned into a life-threatening infection

COVID cases up 76% among kids in recent weeks
Thanks for reading CBS NEWS.
Create your free account or log in
for more features.
View CBS News In
CBS News App Open
Chrome Safari Continue
Be the first to know
Get browser notifications for breaking news, live events, and exclusive reporting.