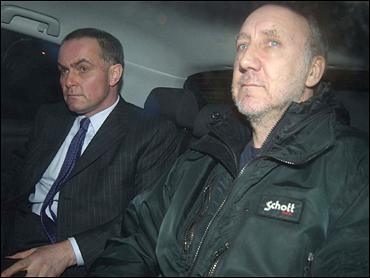 Rock guitarist Pete Townshend was released from police custody Tuesday, but he may soon have to face more questions following his arrest on suspicion of possessing indecent images of children, his lawyer said.

Police questioned the founding member of The Who at a southwest London police station for an hour and 20 minutes Monday night, releasing him shortly after midnight, nearly five hours after he was first detained.

A police spokesman said the legendary musician had signed an agreement saying he would return to the station later in January.

Reporters saw Townshend — who has acknowledged using a Web site advertising child pornography but says he was merely doing research for his autobiography — leaving the stationhouse in the back seat of a Mercedes, lying down partially covered by what appeared to be a bag or a coat.

"He is going home to get some rest," his lawyer John Cohen said. "He is tired but all right." Cohen said the guitarist might be required to answer more questions later.

The rock star has not been charged with a crime. Under British law, suspects are not charged immediately upon arrest and some arrested people are eventually released without charge.

Townshend looked haggard and pale as he was driven to the police station earlier Monday.

Police did not officially identify him as a suspect, saying only that they had arrested a 57-year-old man on suspicion of making and possessing indecent images of children and of incitement to distribute them. A police spokesman confirmed privately that the suspect was Townshend.

Officers searched his home in Richmond, Surrey, outside London, Monday afternoon and said they had removed computers and were examining them.

In a statement on Saturday, Townshend said that on one occasion he had used a credit card to enter a site advertising child pornography. But he said he was not a pedophile and was only doing research for an autobiography dealing with his own suspected childhood sexual abuse. He said he had tremendous rage toward pedophiles and wanted to deal openly with it.

In Monday's edition of The Sun newspaper, Townshend said he did not download the images.

Townshend, who helped form The Who in the early 1960s, said in his initial statement that he believed he was sexually abused as a young boy, while in the care of his mentally ill grandmother.

"I cannot remember clearly what happened, but my creative work tends to throw up nasty shadows — particularly in 'Tommy.' Some of the things I have seen on the Internet have informed my book, which I hope will be published later this year," he added.

The title character in Townshend's rock opera "Tommy" — a deaf, dumb and blind pinball wizard — is sexually abused by an uncle.

He said he despised those who created and used child pornography, and "if I have any compulsions in this area, they are to face what is happening to young children in the world today and to try to deal openly with my anger and vengeance toward the mentally ill people who find pedophiliac pornography attractive."

He said he was willing to have police examine his computer hard drive to exonerate him.

Roger Daltrey, Townshend's bandmate from The Who, said he believed the guitarist is innocent.

"My gut instinct is that he is not a pedophile, and I know him better than most," he was quoted by The Sun tabloid as saying before Townshend's arrest. "Pete has perhaps been a little naive the way he has gone about it, but I believe his intentions are good."

"I'm very shocked and I hope it's not as bad as it sounds," Elton John said backstage at the American Music Awards presentation in Los Angeles Monday night. "I'm a friend of Pete's. I love Pete, and my thoughts are with him."

The model Jerry Hall, a Townshend friend, said Sunday he was an "avid supporter" of child welfare groups and had spoken at length about the dangers of child pornography on the Internet.

The star's arrest was part of Operation Ore, the British arm of an FBI-led crackdown on people who view child pornography on the Internet.

Townshend was one of The Who's four founding members, along with bassist John Entwistle, singer Daltrey and drummer Keith Moon. Moon died in 1978 and Entwistle died last year.

The group, founded in London in the early 1960s, was part of the British rock invasion along with the Rolling Stones and the Beatles. Their parade of hits included "I Can See For Miles," "Pinball Wizard," and "Won't Get Fooled Again."