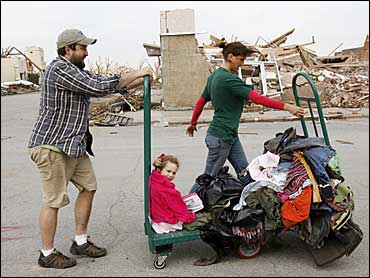 Rescuers raced Saturday through the wreckage from a giant tornado that killed at least eight people and left little standing in this southwest Kansas town beyond the local pub.

Forecasters issued a fresh tornado warning Saturday evening in the region, where Friday's weather was blamed for nine deaths, a figure authorities feared could rise.

The massive twister — as much as a mile wide — wiped out entire neighborhoods and spared almost nothing in its path. In the town's business district, all but a few buildings were destroyed, CBS News correspondent Drew Levinson.

"There's a couple of structures that aren't as heavily damaged as others, but it was wide enough to completely get the entire city of Greensburg," says Maj. Gen. Todd Bunting of the Kansas National Guard. "Absolutely catastrophic damage."

City Administrator Steve Hewitt estimated 95 percent of the town of 1,500 was destroyed and predicted rescue efforts could take days as survivors could be trapped in basements and under rubble.

Among the only structures that survived was the Bar H Tavern, the town's only bar. It was briefly converted into a morgue.

Survivors of the storm picked over the remnants of their homes and possessions, still dazed by the twister's strength and scope.

"We could see everything flying around. It sounded like diesel engines, jet engines. It was just horrible," one survivor told CBS News.

Jackie Robertson and her family spent Saturday afternoon collecting wedding photos, a wallet and other belongings from the debris that had been her home.

Robertson, her husband and a friend spent Friday night in a cellar when the storms struck the area.

"My heart just aches for everyone," she said. "It is so surreal. This is where I live."

The town, previously best known as the home of the world's largest hand-dug well — 32 feet in diameter, 109 feet deep when it was finished in 1888 — was a nightmare of splintered homes and smashed vehicles, the air redolent with the smell of sap from trees stripped of bark.

"We want everybody to know, and I plead to the American people as well as the people here in Kansas, this is a huge catastrophe that has happened to our small town," Hewitt said during a news conference. "All my downtown is gone. My home is gone. My staff's homes are gone. And we've got to find a way to get this to work and come to work every day and get this thing back on its feet. It's going to be tough."

Residents said they heard the tornado warning sirens — a common feature of towns in "Tornado Alley" — about 20 minutes before the storm hit.

National Weather Service meteorologist Larry Ruthi said the path of damage was 1.4 miles wide, estimating it would be classified a "upper F-4 or an F-5" tornado, the strongest possible.

Jose Peraza said he was driving his oil rig into town when he heard the siren and driving hail started pounding the area. He pulled over and hid with several other people in a convenience store freezer.

He said the storm ripped the side off the freezer, and when he came out he found the twister had thrown his truck — weighed down by 40,000 pounds of oil — "like nothing."

The dead included eight in Kiowa County, where Greensburg is located, and one in nearby Stafford County, said Sharon Watson, a spokeswoman for the Kansas Adjutant General's Department.

"We continue to find folks and this will go on for a good couple days — the rescue itself," Hewitt said. "I mean, the debris is just unbelievable. Even if you are in a basement, I mean your home is collapsed, and we've got to find a way to get to you."

State Rep. Dennis McKinney, the Kansas House minority leader, said he and his daughter kid in the basement while the storm destroyed his home. Then he helped search homes for survivors but noted "the inspections didn't take that long because in the western part of town, there weren't many homes left to inspect."

The White House said President Bush was briefed on the situation. Federal Emergency Management Agency spokeswoman Dawn Kinsey said FEMA was preparing to help once Kansas officials request assistance. "We've been in contact with them since the beginning," Kinsey said.

Scores of injured people were sent to hospitals as far away as Wichita, 110 miles away. More than 70 went to Pratt Regional Medical Center about 30 minutes away, with all but 14 treated and released, said hospital spokeswoman Kim Stivers.

Rescuers pulled about 30 people from the basement of a partially collapsed hospital early Saturday, but most of them had minor injuries, Watson said.

The twister was part of a storm front that spawned tornadoes along a line stretching northeast from Greensburg through central Kansas. Three small tornadoes touched down in rural southwestern Illinois, but no damage was reported. Two more struck in Oklahoma and another in South Dakota, damaging some structures, officials said.

No injuries were reported in any of those states.