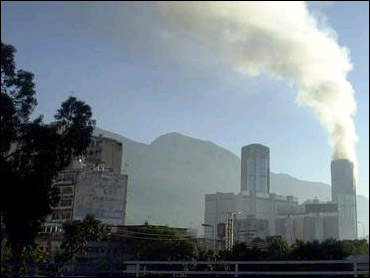 Military helicopters doused one of Venezuela's tallest buildings with water Sunday, bringing under control a blaze many feared might cause the tower to collapse.

Earlier, nearby residences and businesses were evacuated. Two floors and some staircases in the building collapsed. But by Sunday afternoon, the temperature inside the burning building had dropped, lessening the danger of a collapse, Caracas fire chief Rodolfo Briceno said.

"Engineers have gone up there and inspected" the building, Briceno said, adding that "it is very solid."

Neighbors of the 56-story, 730-foot office tower were allowed to return to their residential buildings in downtown Caracas' Parque Central complex Sunday afternoon, but firefighters expected to work through the night to extinguish the last flames and keep them from spreading.

The blaze began before midnight Saturday on the 34th floor of the East Tower in the complex, Briceno said. By Sunday afternoon, it had burned for more 17 hours and spread over 26 floors, reaching the roof. The complex was built in 1976 and is considered a Caracas landmark.

The building was empty when the fire broke out, but 40 firefighters were injured when they inhaled poisonous gases, fire officials said. Their condition was not immediately known and Briceno did not say what might have caused the fire.

The high temperatures also stopped firefighters from reaching the tower's upper floors, where the fire was strongest. Military troops and rescue teams were brought in to help, and military helicopters flew over the building, dropping water on the tower, which houses government offices and ministries.

Firefighters' efforts were also hampered by malfunctioning water pumps and the lack of fire extinguishers inside the building as fire laws are not strictly enforced in Venezuela.

Earlier in the day, officials expressed fears that the building might collapse.

"There is a problem because the building is made of steel. Because of the high temperatures, the structure could collapse," Interior minister Jesse Chacon told President Hugo Chavez during his weekly radio and television show.

More than 100 paintings and sculptures in the contemporary art museum next to the tower were put into a vault for safekeeping, a museum official said.