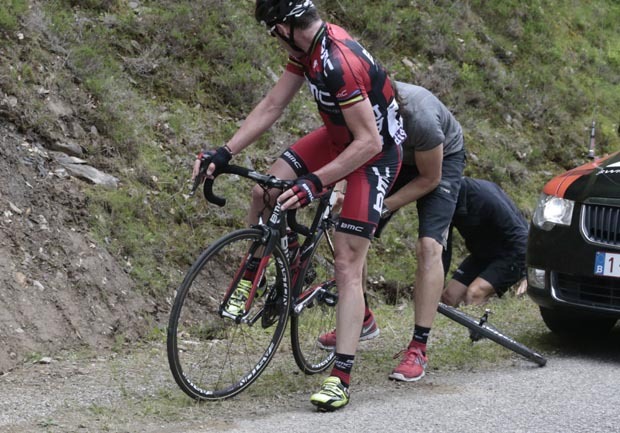 (AP) TOULOUSE, France - Tour de France riders have already battled crashes, flares, and fans or dogs straying into their roads. Now, some ne'er-do-well dumped tacks on the road, and if the aim was to disrupt cycling's big race, it worked.

But as cyclists often do in the face of difficulty, they kept going.

Bradley Wiggins of Britain, the Queen Bee of the pack because he is wearing the yellow jersey, drew plaudits for at least slowing its pace and waiting for defending champ Cadel Evans in Sunday's Stage 14.

Tour officials estimated that around 30 competitors in the main pack blew flats near the day's steepest climb, the Mur de Peguere, as Luis Leon Sanchez led a breakaway far ahead of the trouble to win the stage. One rider crashed as a result of the tacks.

French police — who line the course route by the hundreds for crowd control each stage — were investigating the rare if not unprecedented, incident in a sport already saddled with issues from doping to crashes.

One of the great appeals of cycling — that it's free for fans — is equally its susceptibility. Despite organizers' best efforts, fans with nefarious motives can disrupt cycling races, and the Tour is no exception.

Wiggins, a 32-year-old Sky leader hoping to become Briton's first winner of the Tour, had luck on his side. He avoided the chaos and spent another trouble-free stage as his team controlled his main rivals to protect his yellow jersey.

Evans, though, was caught in the havoc. He had to wait three times for help dealing with flats. He lost nearly two minutes at one point before teammates arrived and gave the former world champion a rear wheel.

But Wiggins honored cycling etiquette by not attempting to capitalize on Evans' misfortune. He urged the peloton to slow down to allow Evans to return to the pack. Wiggins and Evans finished in the same time: 18 minutes, 15 seconds behind Sanchez, the winner of the 119-mile ride between Limoux and Foix in southern France.

It was the race entree to the Pyrenees mountains. Wiggins kept his overall lead of 2:05 over Sky teammate Christopher Froome. Vincenzo Nibali of Italy is third, 2:23 back, while Evans remains fourth, 3:19 behind.

With only two big mountain stages remaining before the race ends in Paris next Sunday, and a long time trial in which Wiggins is expected to blow away his rivals, the British former Olympic track champion appears well set to win the three-week race.

But he knows of the unforeseen hazards, such as crashes, illness or even tacks.

"What can you do? It's something we can't control," he said. "There's nothing stopping more of that sort of stuff happening. It's sad. Those are the type of things we have to put up with as cyclists."

From time to time, stray dogs or photograph-snapping fans get hit by speeding riders. On Friday, Wiggins was hit on the arm and sustained minor burns from a flare waved by a spectator. Three years ago, Oscar Freire and Julien Dean were hit by pellets from an air rifle.

"We're out there, quite vulnerable at times, very close to the public on climbs," Wiggins said. "We're just the riders at the end of the day and we're there to be shot at, literally."

Speaking on French TV, race director Jean-Francois Pescheux commended Sky for encouraging the pack to not speed ahead. He said a hunt for the culprit would be difficult because thousands of fans were on the roadside.

"This could have had terrible consequences on a descent like that," Tour director Christian Prudhomme said. "This is dangerous and stupid behavior."

Astana rider Robert Kiserlovski dropped out of the race after breaking his collarbone in an accident related to the tacks.

Wiggins escaped, though he changed bikes in the final descent.

"We're really, really lucky, nobody punctured," said Sky manager Dave Brailsford. "Brad changed his bike, but no panic ... He decided to slow down a bit and not take advantage of it."

Evans, whose chances of repeating are all but gone, lost the Spanish Vuelta three years ago after being delayed by a wheel change during the 13th stage.

"That's the way things go in life. Karma hopefully comes around," he said. "I couldn't see (the tacks) on the road. It happened to me three times, and at crucial moments. This has happened to me before, two times in Spain, that's why I don't race in Spain very often."

"But there's a few people that just take things too far," he said.

Sanchez used his time trial experience for his solo victory. He was among a group of five riders who had broken away on the Mur de Peguere — apparently before the tacks were thrown.

The Spaniard then made a decisive move seven miles from the finish to win his fourth career Tour stage. Slovakia's Peter Sagan, in the green jersey of the Tour's top sprinter, finished second — 47 seconds behind. France's Sandy Casar was third, with the same time.

Sanchez, hampered by a wrist injury during the first week, crossed himself and pointed his fingers skyward as he went over the finish line.

Sagan and two other riders escaped from the peloton after 22 miles during the descent after the first climb. Eight riders, including Gilbert, Casar and Sanchez, then broke away in pursuit of the trio and bridged the gap while the second peloton caught up with the yellow jersey's group. With none of the 11 escapees posing a threat in the overall standings, they were given the freedom to continue.

Despite rain and cooler weather, the ascent was uneventful. Wiggins' teammates set the tempo at the front of the pack while the Briton's rivals didn't dare a move.

Monday's 15th stage is a flat 99-mile stage between Samatan and Pau tailored to give sprinters one more chance for a stage win before two very difficult mountain stages. Riders will only have to negotiate three minor hills in the last third of the stage.