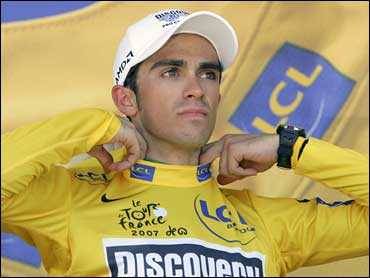 Italy's Daniele Bennati won the 17th stage of the Tour de France and Spain's Alberto Contador became the new overall leader Thursday, a day after Michael Rasmussen was sent home for lying to his team in another devastating jolt to cycling's premier event.
Sunday's ride through the heart of Paris likely will prove to be unforgettable.

For all the wrong reasons.

Just a day after star Alexandre Vinokourov tested positive for a banned blood transfusion, the Tour also lost the man who most believed would be wearing the yellow jersey down the Champs-Elysee.

Rasmussen's expulsion, which Bergsma said was ordered by the Dutch team's sponsor, was linked to "incorrect" information the rider gave to the team's sports director over his whereabouts last month. Rasmussen missed random drug tests May 8 and June 28, saying he was in Mexico. However, a former rider, Davide Cassani, told Denmark's Danmarks Radio on Wednesday that he had seen Rasmussen in Italy in mid-June.

Only once before has the race leader been expelled. In 1978, Belgian rider Michel Pollentier, trying to evade doping controls after winning a stage in the Alps, was caught with an intricate tube-and-container system that contained urine that was not his, said Tour historian Jean-Paul Brouchon.

Tom Lund, chairman of the Danish Cycling Union, said Rabobank "did they right thing, because it is a situation that no serious team cannot live with."

Rasmussen, the leader since July 15, could not be reached for comment by the AP late Wednesday.

"I have no idea what I should do or where I will go," he told Dutch newspaper Algemeen Dagblad. "This is an enormous blow for me, and also for all the guys from the Rabo team. They're devastated."

Just hours before he was sent packing, however, the 33-year-old told the AP he was being victimized.

"Of course I'm clean," Rasmussen said, after a doping test following Wednesday's stage win. "Like I said, I've been tested 17 times now in less than two weeks. Both the peloton and the public, they're just taking their frustration out on me now. I mean, all I can say is that by now I had my test number 17 on this Tour, and all of those have come back negative. I don't feel I can do any more than that."

With Rasmussen out, Contador of the Discovery Channel team moved into the lead. Australian Cadel Evans, who rides for Predictor-Lotto, moved up to second, with U.S. rider Levi Leipheimer, also with Discovery, now third.

"It's in no way a celebration on our end. It's the third piece of bad news," said Discovery Channel spokesman P.J. Rabice. "It reflects badly on our sport."

Tour organizers said Tuesday they would have stopped Rasmussen from participating in the race had they known about the missed tests, and CBS News correspondent Richard Roth reports they're also refusing to let the scandal put the brakes on the world's most famous bike race.

"We cannot say that Rasmussen cheated, but his flippancy and his lies on his whereabouts had become unbearable," Tour director Christian Prudhomme said.

The leader of cycling's governing body applauded the decision.

"The team decided to pull him out. That's their prerogative," International Cycling Union president Pat McQuaid said. "It's a zero-tolerance policy, and it's a lesson for the future."

After the Tour's upbeat start in London, when millions of spectators lined streets to watch, bad news — nearly all of it related to doping — quickly dominated.

German rider Patrick Sinkewitz crashed into a spectator then was revealed to have failed a drug test in training before the Tour, and Vinokourov was sent home after testing positive for a banned blood transfusion. On Wednesday, as Rasmussen was riding toward his stage 16 win, the Cofidis squad confirmed its Italian rider Cristian Moreni failed a doping test, prompting the withdrawal of the entire squad.

Police detained Moreni after he finished the stage and searched the hotel where his Cofidis team was staying. Results from the raid weren't expected until Thursday. France has tough laws against trafficking in doping products.

Cofidis manager Eric Boyer said Moreni "accepted his wrongdoing" and waived his right for a follow-up test to confirm the results of the first, which was positive for the male hormone testosterone.

Although Rasmussen has not tested positive, some fellow cyclists had openly voiced skepticism of his results. Fans booed Rasmussen at the start of Wednesday's stage, and mostly French teams staged a protest to express disgust at the doping scandals that have left cycling's credibility in tatters.

As the starter's flag came down, dozens of riders stood still as Rasmussen, sprinter Tom Boonen and several others began riding away. Some riders were forced to lift up their bicycles to get around their protesting colleagues, who eventually rejoined the race after causing a 13-minute delay. But the message was sent.