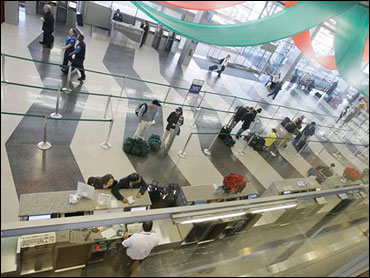 Despite plummeting gas prices and unusual last-minute holiday deals on airplane tickets, more Americans are expected to stick close to home this Thanksgiving.

Nationally, the Automobile Association of America says 41 million Americans were expected to travel more than 50 miles for the holiday, down about 1.5 percent, or 600,000 people, from last Thanksgiving. Of those, about 4.5 million are expected to fly, down about 7 percent from last year, while around 33.2 million will drive, a decrease of about 1 percent.

It is the first decrease in holiday travel nationally since 2002, and the largest since the Thanksgiving that followed the terror attacks on Sept. 11, 2001.

The reason, as a surly economist might say: It's the economy, stupid.

"The economy is in such bad shape. ... They're still really hesitant to take that trip," said Beth Mosher, spokeswoman for AAA Chicago.

But a 7 percent reduction is a relatively minor dip, so ...

"You're probably not going to notice," Amy Ziff, editor-at-large at Travelocity, told CBS News correspondent Thalia Assuras, "because the airlines have cut capacity and there are still going to be a lot people on the roads and even more people taking trains and buses to get to their Thanksgiving destinations this year."

For airlines, the lowered fares at a time when they usually can mark them up can't combat the extra fees the struggling industry has tacked on to everything from checked baggage to pillows to in-flight food.

At Boston's Logan Airport, Alicia Kelly, her husband and two children were heading to Miami to spend the holiday with family. Kelly said there were no lines at Logan Airport Wednesday morning and that it was the lightest Thanksgiving travel she's ever seen.

Likewise, in Colorado, holiday travelers found short lines and brief waits at Denver International Airport as airlines ramped up for the Thanksgiving rush.

Airport officials in Denver expect about 20,000 fewer travelers this week than last year because of the worsening economy.

Graeme Wallace, chief technical officer for farecompare.com, a consumer airline ticket research Web site, said it may take until after the first of the year before airlines know if the recent fare reductions will put many more people on planes. He said in his recent experience, business flights have been crowded but leisure flights are often half empty.

Even with fewer travelers, some of those who hit the road, or take to the skies, might have a rougher time getting back home, reports CBS News correspondent Sharyl Attkisson. The forecast does call for rain and snow to move in by Sunday, especially in the East, and bad weather almost automatically creates delays.