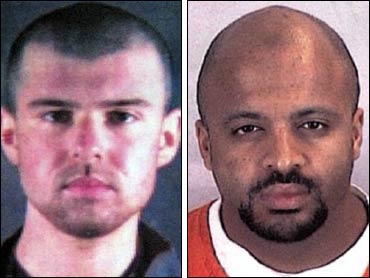 So it's hard to imagine what U.S. District Judges Leonie M. Brinkema and T.S. Ellis III are going through these days as they try to sort through the growing complexities of their respective cases involving Zacarias Moussaoui and John Walker Lindh.

Judge Ellis, for example, has to figure out precisely how to ensure Lindh's constitutional rights to confront the witnesses against him while protecting the government's interests in ensuring both the security of its intelligence personnel and the integrity of the detainee system in Cuba. Both sides offer legitimate points about how and why the judge ought to rule their way.

Both sides comprehend what is at stake in their respective positions. And there is precious little direct precedent upon which the judge may rely in coming up with both an answer and a solution.

Add it all together and it represents a giant headache for Judge Ellis, who is going to have to bring to bear an awful lot of creativity and judicial acumen to ensure both a fair trial for Lindh and the protection the feds seek.

Lindh's lawyers make their case quite simply. There are 13 "detainees" at the American lockup at Guantanamo Bay whose interviews with federal authorities "refer specifically to Mr. Lindh and/or provide exculpatory information" about the government's conspiracy charge against Lindh.

Naturally, the defense wants to interview these particular detainees to find out whether and to what extent their testimony could help Lindh either at his trial in August or at an important pre-trial suppression hearing in July. Normally, such interviews would be routine but, of course, there is very little about the war on terror and its place in the court system which is "routine."

That's where the government comes in. The feds tell Judge Ellis that they cannot permit Lindh's lawyers to interview the detainee-witnesses directly "because of the significant security interests at stake, and the need not to impede the Department of Defense's ability to handle the captured combatants in its custody..."

More specifically, the Justice Department argues that "permitting defense counsel direct in-person access to the captured combatants...or requiring the Defense Department to bring detainees into the United States, would raise grave threats to the security of the base at Guantanamo Bay."

So while prosecutors recognize the general right of defendants like Lindh to conduct this pre-trial investigation, they propose permitting Lindh's attorneys to submit written questions to the detainees, the written answers to which the feds pledge to return to the defense team.

Not surprisingly, that's a solution that simply doesn't fly with the defense, which has told Judge Ellis that it is "not an adequate substitute for in-person witness interviews." That procedure, Lindh's lawyers said Tuesday, "would give no opportunity to clarify or follow-up on answers to questions, and no opportunity to discover unanticipated exculpatory testimony. Since many of these exculpatory witnesses do not speak English well, if at all, the ability to ask follow-up and clarification questions takes on added importance."

Besides the importance of one-on-one interviews, Lindh's lawyers contend, there have been plenty of outsiders who have visited Guantanamo Bay since the detainees got there without creating any "grave danger." Either give us access to the witnesses, the defense says, or force the feds to drop the conspiracy charge.

Nonsense, say prosecutors, who also have told Judge Ellis that they aren't even sure he has the jurisdiction to order the Defense Department to do much of anything in this case.

Forcing prosecutors to drop their conspiracy charge against Lindh over this particular dispute isn't going to happen. But neither is the government's solution of permitting written questions to be forwarded to the detainees. Lindh's lawyers are right to argue that it's a solution which is really no solution at all.

So what should Judge Ellis do? How can he reconcile these positions without jeopardizing Lindh's constitutional rights or the government's interests? Here's where the creativity needs to come in.

Judge Ellis should require both sides — and the Defense Department, for that matter — to get together quickly and come up with a plan to undertake a secure video-link between Alexandria, Va., and Guantanamo Bay. On one side of the video conference, in Virginia, defense attorneys, an interpreter, and a special court master should gather. On the other side of the teleconference, at Guantanamo Bay, the detainee-interviewee, an interpreter, a special court master and an armed guard should gather. The interview ought to then take place via video.

The defense can ask the questions. The detainee can answer — or not. The interpreters can interpret. The guards can guard and the special masters can oversee the proceedings to ensure no monkey-business takes place. The interviews can be taped. The guards can be sworn to secrecy or they can be permitted to forward to authorities only that information which may be relevant to ongoing and future security concerns.

Surely the government could undertake security clearance for any court personnel and interpreters who would be used in Cuba. And surely the defense in this scenario would get to have the in-depth interviews it says it needs without physically intruding upon the Gitmo scene. Unusual circumstances call for unusual solutions and Judge Ellis could rid himself of a giant pre-trial problem by forging a compromise based upon good technology and the absence of any other legitimate alternatives.

Meanwhile, in the Moussaoui case, Judge Brinkema has been bending over backward to try to ensure a fair trial for the defendant, even as he tries to have her removed from his case for what he perceives to be her unfair bias toward him. When Moussaoui followed up on his in-court request to represent himself by willy-nilly filing his own pro-se court papers late last week, Brinkema was forced to issue a four-page written order essentially educating Moussaoui about how papers should be filed in a criminal case.

Judge Brinkema gave Moussaoui specific directions for how to file papers "under seal" if he doesn't want the public to see them or "ex parte" if he doesn't want the government to see them. She even pledged to have the clerk of her court make copies of the defendant's documents since "the United States Marshal is unable to secure copying arrangements for the defendant with the Alexandria City Jail."

This is the sort of thing a federal judge in a capital case isn't supposed to have to pay attention to; the sort of thing that only comes up when a defendant seeks to represent himself after asking to have his own counsel fired. It shows just how nettlesome Moussaoui will be until his trial and it also shows how intent Judge Brinkema is on ensuring that the so-called "20th hijacker" gets the fairest trial possible in the circumstances.

Judges Ellis and Brinkema are certainly earning their keep these days. And their jobs don't figure to get any easier in the months to come as the motions and briefs and issues keep piling in and piling up.