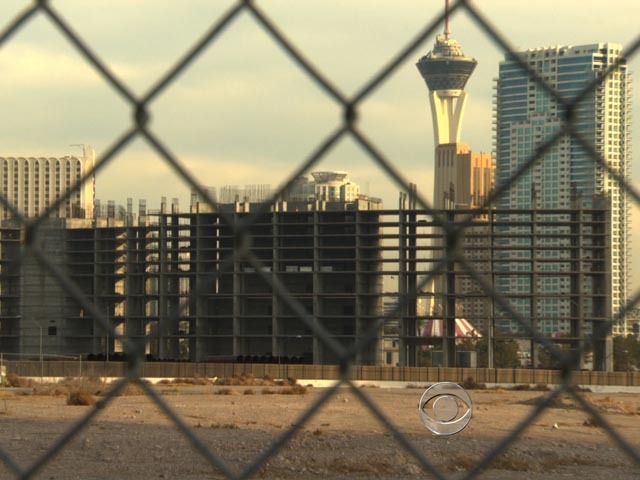 President Obama's tour of five battleground states in the coming election took him Thursday to Las Vegas, Nevada. No state has a higher unemployment rate -- 12.6 percent -- and no city a higher foreclosure rate. CBS News correspondent Anthony Mason now on what can happen when a state places all its bets on a single industry.

The sign says "Fabulous Las Vegas." But it's not so fabulous these days. Sin City's economy was built on gaming and tourism. Yet in the recession, that hand was a bust.

"You wanna talk about a company town? This is a company state," said Jim Murren, CEO of MGM Resorts.

Murren runs a dozen resort casinos in Vegas. With 50,000 workers, MGM is the largest employer in Nevada and its biggest source of tax revenue. "We alone -- one company -- represent about 12 percent of the entire state budget," he said.

There are plenty of casualties along the strip. That's the half-built skeleton of the Echelon, a planned five-hotel mega resort. But construction stopped when the recession hit and has never resumed.

Up the strip, the bankrupt Fontainebleau is also unfinished. The historic Sahara closed its doors last May. Even MGM's massive City Center, the largest privately-funded construction project in U.S. history, nearly didn't make it.

"We need to diversify our economy," said Murren. "We need to bring more businesses here."

But for entrepreneurs like Jason Mendenhall, the city hasn't made it easy.

Mendenhall is executive vice president of Switch, a high-tech hub for data storage. Its clients include the government, banks and Fortune 500 companies.

"We are," he said. "It will be one of the largest construction projects in the state of Nevada. We're gonna create over 3,000 construction jobs and hundreds of technical and operation jobs as we continue to grow."

Nevada now points to Switch as the model of the kind of business it wants to attract.

"Is it getting better?" Mason asked.

"It is," said Mendenhall." And I think what has happened is the mindset of the people within the state has changed dramatically."

At MGM, Jim Murren thinks a full recovery is still two years away. But after laying off 8,000 workers in the recession, MGM is investing in its Vegas hotels this year.

"We are utterly confident and we're putting our money where our mouth is," said Murren.