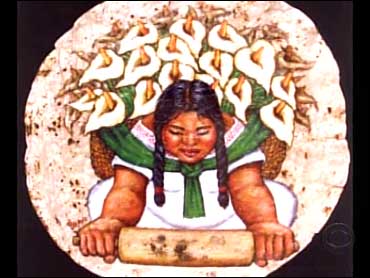 Great paintings can be found on many surfaces: canvas, wood, plaster, even brick walls.

But one artist in East Los Angeles goes in a very different direction. Joe Bravo paints on tortillas.

He told Kauffman he's heard all the puns, such as "food for thought."

Bravo said he's been at it 30 years, explaining, "I didn't have money for canvas, so I just started painting on tortilla."

And there is some serious motivation, he says, for using them: "I grew up eating tortillas, they represent the Mexican, Latino, uh, life, our food, our family, just, you know, our heritage. … It's a responsibility to accurately portray my culture to the world"

A tortilla exhibit is breaking attendance records at L.A.'s Mexican Cultural Institute. The small, non-profit gallery was on the verge of closing its doors, but its fortunes could be turning, thanks to tortillas, Kauffman says.

In his home studio, Bravo begins with the biggest tortillas he can find, then adds fire.

The burn marks are inspiration, he says, as if the tortillas tell him what they want to become.

"We look at things sometimes and we see images in them," Bravo explained, "so the tortilla is a perfect vehicle for that."

Coated with acrylic, and with burlap on the back, the tortilla becomes a flexible canvas.

"If (the tortillas weren't) coated with varnish, (they) would break," Bravo says. "It's like I'm encasing (them) in plastic."

Whether kitsch, or fine art, Bravo's works are earning Bravos not just form lookers, but buyers, including celebrities.

"Flea from the Red Hot Chili Peppers bought Virgen de Guadalupe," Bravo told Kauffman. "Tyra Banks commissioned me to do a portrait of her, and I did one of Hillary Duff, as well."

"Chinese Dragon," 22 inches in diameter, unframed, was just produced for his show in Hong Kong in August.

Also, "Communion," 32 inches by 32 inches, a framed acrylic painting on a tomato-and-basil tortilla canvas with an appliquéd whole-wheat tortilla. Bravo has begun using flavored tortillas by Tumaro's Gourmet Tortillas, which provide him with a wide array of colored organic canvases on which to paint. This piece was specially commissioned by the company's CEO and founder, Herman Jacobs.

To see much more of Bravo's work and learn much more about him and exhibits his work appears in, visit his Web site at www.JoeBravo.net.

Tortilla paintings are now on display at a Fresno, Calif., art gallery, Arte Americas, whose Web site can be found at www.arteamericas.org.