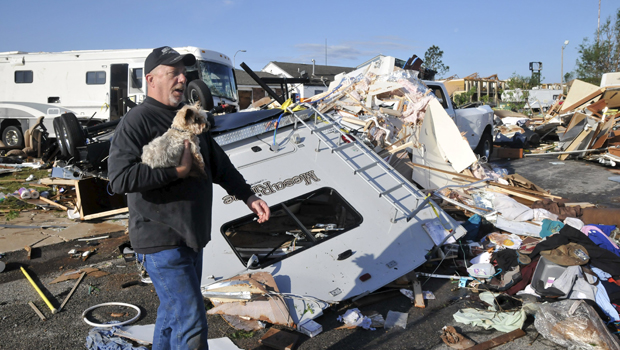 OKLAHOMA CITY -- Victims from a 51-twister outbreak across Tornado Alley sifted through rubble Thursday while forecasters issued ominous forecasts for the coming days.

Tornadoes hit Nebraska, Kansas, Oklahoma and north Texas on Wednesday. Most were small and chewed up only farmland, but a pair crossed into Oklahoma City and damaged homes and businesses.

On Thursday morning, Oklahoma City police confirmed to CBS News that a 42-year-old woman died during the severe weather. She drowned in her storm shelter, which flooded in southeast Oklahoma City. A few injuries were reported - including about a dozen at an Oklahoma City trailer park.

"There is a hotel on Interstate 35 that sustained major damage - it just looks destroyed," said Oklahoma Police Sergeant Gary Knight. "We've been going room to room."

The Storm Prediction Center had warned that severe weather would come to Tornado Alley and said more storms were possible later in the week. Meteorologist John Hart said the greatest threat for severe weather Thursday was in southern Oklahoma and North Texas. Even two days out, the center was warning of a "moderate risk" of severe storms Saturday from the high plains of Kansas to the Red River area north of Dallas, including much of western Oklahoma.

"The conditions are right; it's the right time of year," Hart said. "There are just a lot of things that make you think over the next three days there will probably be big tornadoes across the southern Plains."

Throughout the region, flooding was a concern after 5-8 inches fell, said Forrest Mitchell, a meteorologist with the National Weather Service in Norman. The 7.1 inches that fell at the Oklahoma City airport easily eclipsed the previous daily high of 2.61 inches, he said.

Lt. John Vincent of the Oklahoma Highway Patrol said early Thursday that troopers responded to many emergency calls for stranded vehicles overnight and that all stuck vehicles have been checked for trapped motorists. He said all flooded roads have reopened except for the H.E. Bailey Turnpike, which is partially closed.

In Nebraska, 10 to 15 homes were damaged near Grand Island, and between Hardy and Ruskin, near the Kansas line.

A National Weather Service official said a tornado hit Roseland, a rural town of fewer than 250 people about eight miles southwest of Hastings, damaging between 10 and 15 homes and downing power lines.

At least nine tornadoes were reported in Kansas, the strongest of them in the sparsely populated north-central part of the state. That included a large tornado near the tiny town of Republic just south of the Nebraska state line, where some homes were damaged.

In Harvey County, a tornado destroyed a hog barn and damaged trees, according to the National Weather Service.

Lance Bergmann rode out the tornado in his Lincoln County, Kansas, home. "We just got down in the basement and it actually flung the basement doors open and threw some tree debris and stuff in the basement," he told CBS News.

"We have been hit hard today and it's not over. It's not over," said Bergmann.