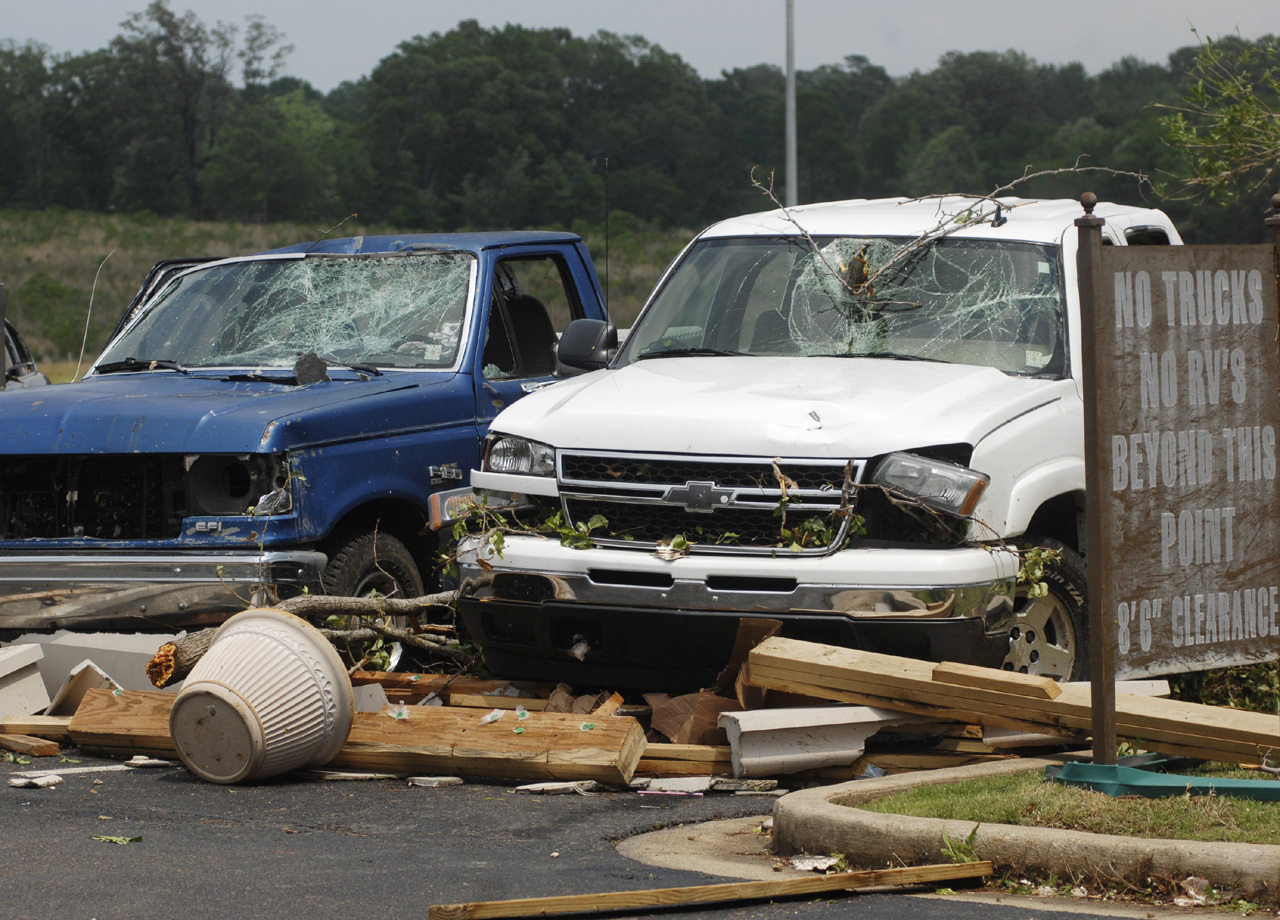 The death toll from a vicious storm system that swept through eight states - the deadliest storm of the season so far - has risen to 17. Forecasters are warning tornadoes are possible across eastern South Carolina and North Carolina.

Officials in South Carolina say a tornado has caused a church to collapse and six people were inside. There is no immediate word on injuries.

Melinda Wadford with the St. Stephen Fire Department auxiliary said Saturday the storm caused damage in several different parts of Berkeley County near the coast. Firefighters are out checking on residents.

The tornado in South Carolina is part of a storm system that already pummeled the South and Midwest, killing 17 people. Widespread damage has also been reported in North Carolina.

Seven deaths were reported in Alabama, including a man killed when the storm tossed a mobile home nearly a quarter of a mile across a state highway.

One death was reported in Greene County, Miss., according to a spokesman for the state's Emergency Management Agency.

Nine fatalities were reported earlier in Arkansas and Oklahoma.

Don Faulkner, meteorologist with the National Weather Service in Mobile, said heavy damage was also being reported in rural Washington County. He estimated around 40 percent of the houses in the area are mobile homes.

Some 30 tornadoes were spotted in eight states.

On average, April sees 163 tornadoes. But this April is only half over, and we've already had nearly 160 tornadoes and an unusually high death toll, reports CBS News correspondent Don Teague.

Reed Timmer, one of the Discovery Channel's "Storm Chasers," followed the storm system from Oklahoma into Clinton, Miss. He called this severe weather outbreak "one of the largest I've ever chased in my entire career as a storm chaser."

"The number of storms was substantial," he said on "The Early Show on Saturday Morning." "I think we were chasing at least six or eight different tornadic supercells, and the environment was so perfect over such a large area, the conditions were setting the stage for historic outbreak."

The cause of the tornadoes: Cold, dry air pushing east from the Midwest, colliding with warm, moist air from the Gulf of Mexico.

As the thunderstorms and tornadoes pass, residents are coming out to survey the damages and pray for miracles. One Oklahoma family's prayers were answered: They found their pet dog, named Miracle, alive - buried under a pile of debris.

The danger isn't over. The storm threat and the tornado threat continues today, as that storm system continues moving slowly east.

The system damaged or destroying dozens of homes, businesses and churches in Mississippi as it swept eastward. Crews worked to clear roads, find shelter for displaced families and restore power to thousands.

"They weren't simultaneous, they were back-to-back," he said.

The mobile home that had been tossed was a pile of rubble, along with another 30 homes or businesses that were destroyed, McKinney said. Four people had minor injuries.

Alabama Gov. Robert Bentley declared a state of emergency for the entire state, and the first race of a busy weekend at the Talladega Superspeedway was postponed until Saturday morning.

The storms began late Thursday in Oklahoma, where at least five tornadoes touched down and two people were killed. The system then pushed into Arkansas, killing seven more. Dozens of others were hurt.

By midday Friday, the storms had marched into Tennessee, Louisiana and later into Georgia. At least three twisters touched down in Mississippi, where a state of emergency was declared in 14 counties, causing widespread damage but only one serious injury.

The hardest hit was Clinton, a city of about 26,000 people just west of Jackson, the state capital. At least seven people were taken by ambulance to hospitals with injuries.

Debra Zepponi, 50, looked at her roof damage and was thankful for what she didn't lose. Her Yorkshire-Maltese mix dog Bailey was not hurt, and her mother's favorite magnolia tree in the yard was the only one left standing.

"I'm glad it didn't get her tree," said Zepponi, whose mother died a few years ago.

In western Alabama, there was massive destruction in the small town of Geiger. An elderly woman was pinned down by her ceiling that had collapsed, but she was rescued without getting hurt, said Margaret A. Bishop-Gulley, Sumter County's emergency management director.

Officials were even having difficulty setting up shelters there. A school didn't have any power and the alternate site, a community center, had just one generator that could only light up half of the building.

"It's just been one catastrophe after another," she said.

Arkansas Gov. Mike Beebe said he had never seen the state suffer so many deaths from straight-line winds -- sudden, violent downbursts that struck with hurricane force in the middle of the night. Typically, tornadoes and floods cause most of Arkansas storm-related fatalities.

"Just trees blowing on people's residences -- I don't recall anything even approaching this," Beebe said.

Unlike tornadoes, which develop from columns of rotating air, straight-line winds erupt from a thunderstorm in unpredictable downdrafts, then spread across the landscape in all directions.

Teams from the National Weather Service worked Friday to learn more about what caused the damage.

Forecasters warned of approaching danger as much as three days earlier, but the winds up to 80 mph and repeated lightning strikes cut a path of destruction across a region so accustomed to violent weather that many people ignored the risk -- or slept through it.

In the Arkansas town of Bald Knob, a 6-year-old boy died when the top of a tree more than 6 feet in diameter crashed through his home while he was sleeping.

The worst damage in Oklahoma was in the small town of Tushka, where residents wondered what would become of their community after a twister damaged or destroyed nearly every home along the two main streets. The only school -- a collection of buildings housing grades K-12 -- was all but gone.

"It's hard to deal with because we're a small community with limited resources. It's hard to do the cleanup," Mayor Brickie Griffin said.

Two people were killed and at least 25 hurt as the tornado plowed through the town of 350 before dawn. At least a dozen homes and businesses were destroyed.

Stacy George, who lives across the street from the school, slowly recovered items from the rubble of her home, which had shattered windows and a collapsed roof. A pickup truck had been blown into the side of the house. But George's husband and 20-month-old son survived.

"We're basically starting over," she said, laying out clothes, cowboy boots, a penny jar, a lamp and a chair in her driveway.

"We're trying to salvage what we can," she said. "It's devastating. It's just horrible. Thank God we have so much help."

Oklahoma Gov. Mary Fallin declared a state of emergency for 26 counties affected by the storm.

Back in Tuscaloosa, Ala., an apparent tornado damaged a motel and struck an oil change business, blowing the plastic out of large signs. Roads were crisscrossed with power poles and trees.

"It was a dark funnel coming down," said Sam Packwood, who works at Bama Mini Storage in Tuscaloosa. "The sirens went off and all; it was pretty exciting for 20 or 30 minutes. I hope nobody got hurt."