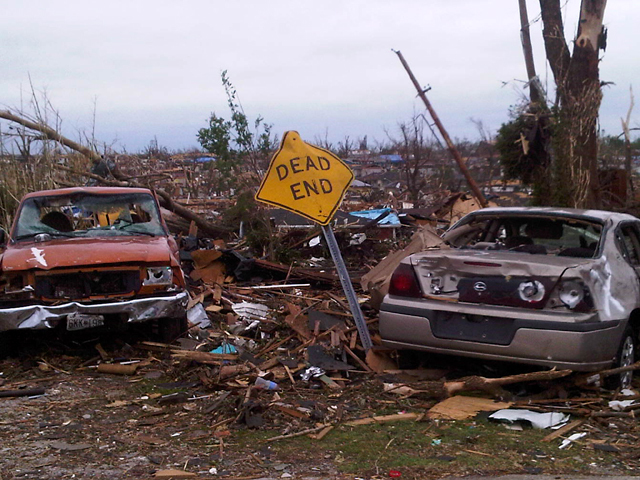 ATLANTA - Many of the states hammered by what's already the deadliest year for tornadoes in more than half a century have among the nation's highest rates of homes without hazard insurance despite being among the most twister-prone, data analyzed by The Associated Press shows.

That means the regions that most need the insurance are often the exact places that don't have much of it. It also means many tornado victims may have a hard time getting compensated for their losses, putting more pressure on the federal government to help even though its assistance is limited by law.

With more than 450 deaths and billions of dollars in damage in the past month alone, regulators are calling for more education about the importance of homeowners insurance and further efforts to make it affordable and available to all. But whether to buy it is still considered a personal choice and there's no push to mandate it federally.

The fallout is on stark display in Mississippi and Arkansas, two of seven Southern states battered last month by twisters. Mississippi ranks second in the nation for the percentage of homes without insurance covering wind damage yet fourth on the list of states that have had the most tornadoes touch down in the past five years. Arkansas ranks fourth for uninsured homes and 10th for being tornado prone, according to the AP's analysis.

States with the highest rates of uninsured homeowners also tend to have a higher incidence of homes without mortgages, meaning owners don't have to answer to banks requiring coverage. The uninsured can turn to aid groups and the federal government for relief — but often not for full compensation.

Poverty and an abundance of older homes that can be difficult to insure contribute to high rates of no insurance. In tough economic times, the temptation to forgo insurance is real.

Tammy and Kevin Cudy of Joplin, Mo., dropped their homeowner's policy, and its $50-a-month premiums, last August after Kevin lost his construction job. They considered reinstating their policy within the past week but said they were unable to reach their insurance agent by telephone.

And then the deadliest single tornado in nearly six decades demolished their five-bedroom home Sunday.

"That's why I'm kicking myself right now," said Tammy Cudy, 47. "The fact that we were thinking about it, that we needed to work our budget around it, it just makes you kind of heart-sick at this point."

Many people don't qualify for insurance if their homes are in high-risk areas, or they have trouble affording a policy to cover wind damage because of high costs associated with home value, aging construction and building codes, Arkansas Insurance Commissioner Jay Bradford said.

"The loss ratios on those houses that are insured are generally pretty high," Bradford said. "They don't have central heat and air. They are older homes. Sometimes, the plumbing and wiring are not up to standard. The rates are higher, and the coverage is limited."

Pictures: CBS News on the ground in Joplin

Bradford is among regulators calling for more education and strategies to make insurance more affordable. Yet he opposes a mandate, as do two lawmakers from tornado zones contacted by phone: Rep. Mike Ross, an Arkansas Democrat, and Rep. Alan Nunnelee, a Mississippi Republican.

Nancy and Homer Davis weren't protected for the worst.

Tight finances kept them from buying a policy on the 80-foot-by-14-foot trailer they purchased eight years ago for $10,000. Homer Davis is on disability and Nancy Davis works part-time at a Lowe's home improvement store. One of last month's twisters lifted their trailer off the ground near Pheba, Miss., smashed it against trees and disgorged their household belongings into a ditch.

"I'm trying to figure out, `Where does my money go?' He's on disability and I'm working part-time," said Davis, 51. "It's just trying to figure out what's the best way to spend your money. You say to yourself, `As soon as I'm ready, I'm going to get insurance on the house."'

Nationally, roughly 4 percent of owner-occupied homes lack homeowners, or hazard, insurance, according to the latest industry estimates. But the numbers vary substantially by region.

The South has the highest rate of homes without hazard insurance, at 17.4 percent, according to the AP analysis. This is followed by the Northeast at 12.2 percent, the Midwest at 8.4 percent and the West at 3.3 percent.

The highest death toll from tornadoes in the past month was in Alabama, which is at the national average for homes without insurance and ranks third for frequency of tornadoes. North Dakota tops the uninsured list and ranks 16th on the tornado-prone list.

Louisiana, another state hit by the April 27 tornado outbreak in the South, ranks 11th in both categories.

The AP analyzed data compiled by the Insurance Information Institute and the U.S. Census Bureau. AP relied on 2008 figures because those were the most recent for which comparisons could be made, and it's unlikely the numbers would have fluctuated much in the past three years, said industry expert Robert P. Hartwig.

About 30 percent of owner-occupied homes in Arkansas and Mississippi lack hazard insurance policies, according to the AP analysis, which reviewed data from all 50 states except Florida, where data was incomplete. In Louisiana, about 17 percent are uninsured. The rate is roughly 10.5 percent in Missouri. Alabama, Georgia, Kentucky and Tennessee all are close to the national average of 4 percent.

By law, the Federal Emergency Management Agency can provide up to $30,300 in grants for home repairs, rental assistance and other disaster-related losses in presidentially declared disaster areas. But that may not cover the cost to rebuild. Insured homeowners can still qualify for FEMA aid, but the assistance is reduced by the amount of the insurance settlement.

Tom and Tammy Priola hope FEMA covers the cost of rebuilding a new house after they lost their 100-year-old home in suburban Birmingham to the tornadoes. Their house is valued at $73,000, more than double FEMA's limit. Inspectors had deemed it too old and risky for coverage so they never purchased homeowners' insurance.

"It's so hard to make plans that you can really follow right now," said Priola, an electrician. "We're in a daze kind of deal."

Homeowners also may be eligible for low-interest loans from the Small Business Administration. Unlike the FEMA program, the SBA money must be repaid, and if the loan is over a certain amount the agency will take a lien against the property until the money is repaid.

FEMA has already registered more than 100,000 individuals and families in the tornado-affected states for assistance and approved tens of millions of dollars for individual assistance to cover temporary housing, home repairs and other needs.

According to Census data, Mississippi and Arkansas have higher-than-usual rates of homes without mortgages — about 41 percent of owner-occupied homes in Arkansas and 43 percent in Mississippi. The national average is under a third of all owner-occupied homes. Missouri stands at about the national average. In many cases, homeowners have inherited their homes and don't need a mortgage which would require insurance, said Larry Cox, a University of Mississippi professor who heads the school's insurance and risk management program.

"It's come down from grandparents, great grandparents, and they never bothered to insure it," Cox said. He added, "I think the general public finds insurance complex, confusing, something they don't want to think about."