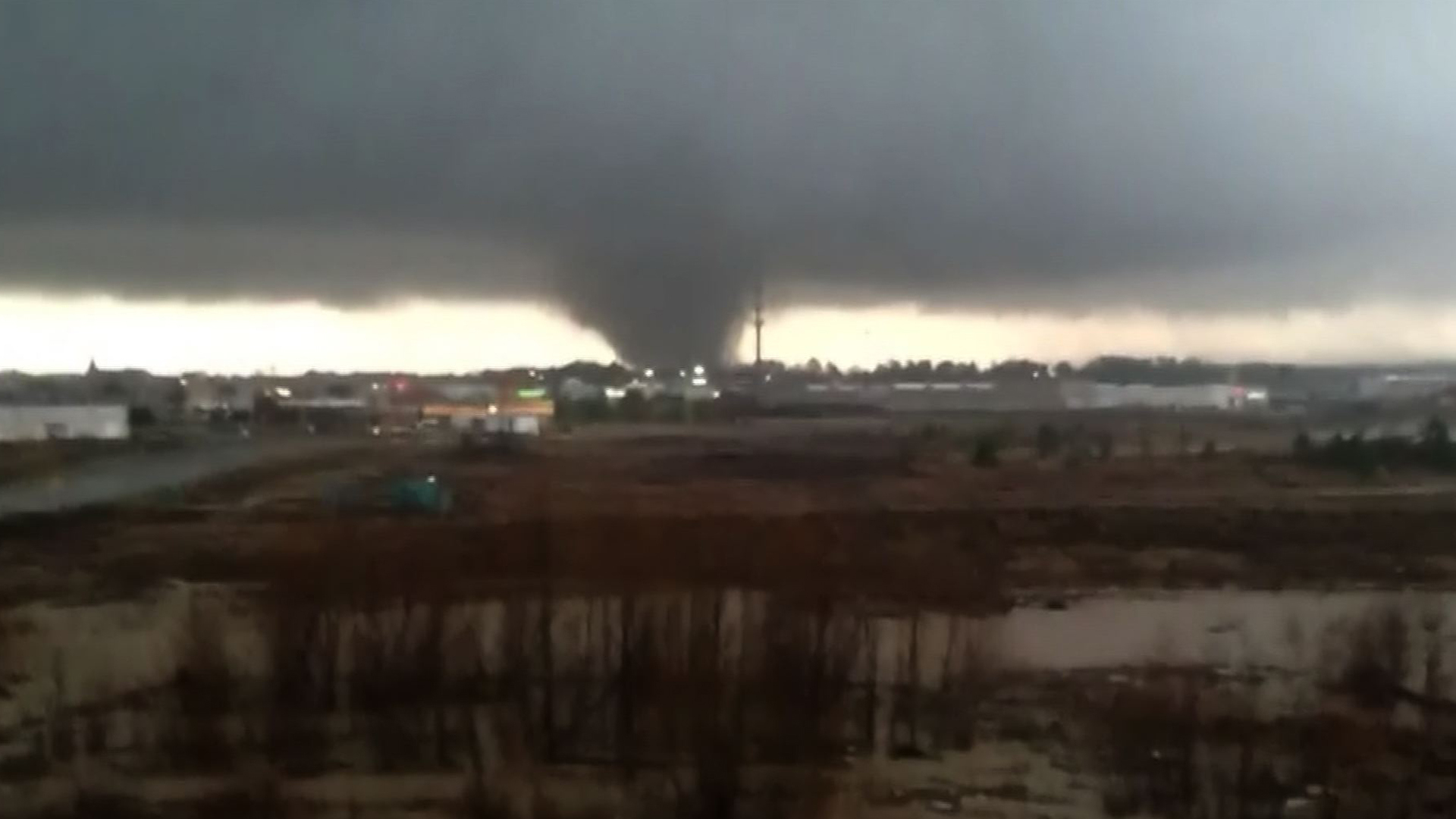 HATTIESBURG, Miss. A tornado tore through Hattiesburg on Sunday as part of a wave of severe storms that downed trees, damaged buildings and injured more than a dozen people.

The twister traveled down one of Hattiesburg's main streets and mangled homes, commercial buildings and structures on the campus of the University of Southern Mississippi. Emergency officials said at least 10 people were injured in surrounding Forrest County and three were hurt to the west in Marion County, but they weren't aware of any deaths.

Mississippi Emergency Management Agency spokesman Greg Flynn said it appears that a single tornado caused the damage in those two counties and Lamar County. Hundreds of homes are damaged in Forrest County, along with a couple dozen in the other two. Gov. Phil Bryant declared a state of emergency.

Flynn said the sheer scope of the damage was slowing their assessment.

"The problem is, it was so strong that there's so much debris that there's a lot of areas they haven't been able to get to yet," he said.

On the campus of the university, trees were snapped in half around the heavily damaged Alumni House where part of the roof was ripped away. Windows in a nearby building were blown out, and heavy equipment worked to clear streets nearby in a heavy rain after the worst of the weather had passed.

The university released a statement saying no one was hurt but that it was under a state of emergency, anyone away from campus should stay away until further notice.

East of campus, 47-year-old Cindy Bullock was at home with her husband and dog, a terrier mix named Vinnie, when she heard the tornado coming. They ran to a hallway and covered their heads. It wasn't long before the windows in the kitchen and bedroom exploded. The storm stripped all the shingles off the roof and left holes in it, while knocking over a large pine tree in the yard.

After dark, the Bullocks were trying to arrange their stuff inside so it wouldn't get wet from the dripping water.

"I just looked out the window and I heard the rumbling. It sounded like a train. We ran to the hall, and the kitchen windows and the windows in the bedroom exploded. It happened pretty fast," she said.

There were large trees blocking the road all through her neighborhood, and several of the houses were hit by falling trees. Her friend was staying with them after the friend's apartment took a direct hit from a falling tree.

Forrest County Sheriff Billy McGee says 10 or 15 people were injured by the tornado that slammed Hattiesburg and other parts of the county, but none of the injuries was serious.

He says, "Most of our injuries have been walking wounded."

To the west, Marion County emergency director Aaron Greer says three injuries have been reported in the community of Pickwick, about seven miles south of Columbia. He says two people were taken to hospitals, but the third didn't have the injury examined.

Greer says one mobile home was destroyed, three other structures have major damage and several have minor damage.

Bryant plans to go to Hattiesburg on Monday to check out damage in the city and at USM, his alma mater, spokesman Mick Bullock said.

On Sunday night, John and Katherine Adams were cleaning up around their one-story white house where the storm punched holes in the roof, busted windows and completely destroyed the back porch. The couple was at home with their 7- and 3-year-old daughters when the tornado passed next to their house.

All through the neighborhood, houses and vehicles were damaged by falling trees.

"We're safe, and that's all that matters," said Katherine Adams, 46.

John Adams, who's in the building supply business, said he was surprised to see broken boards that appeared to be from new construction in his yard because there are no homes being built nearby.

"We've got stuff around here; I don't even know where it came from," he said.