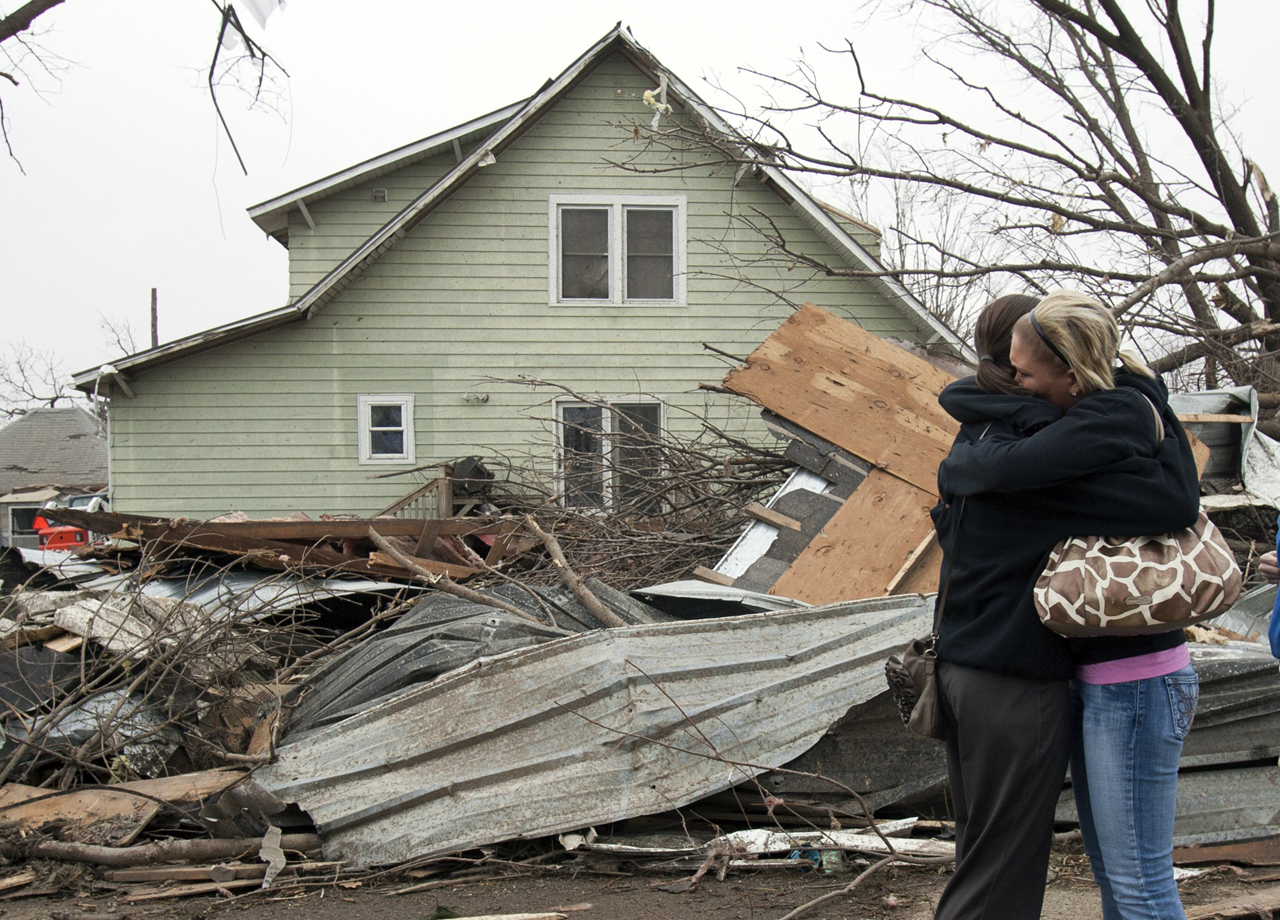 MAPLETON, Iowa - Jamy Garden's house began to rumble with the approach of a tornado that at one point measured three-quarters of a mile wide. Then the windows shattered, spraying her with glass. Using her cellphone as a flashlight, she fled to her basement and called her grandparents in tears.

On Sunday, she returned home, wandering her backyard in a blood-splattered hooded sweat shirt, her right hand and left knee wrapped in gauze. Around her lay a tangle of tree branches, twisted siding, broken glass and a canoe that wasn't hers.

The tornado that struck the evening before damaged more than half of Mapleton, a town of 1,200 in western Iowa, Mayor Fred Standa said Sunday. He estimated about 20 percent of the town was "almost flat."

The huge, centuries-old trees the town was named for had been pulled out of the ground and wrapped around houses and tossed on top of cars, Standa said. In one case, a huge motor home had been flipped on its side.

"It's not a pretty sight," Standa said. "It's something nobody has seen in this town." Garden's house survived, but everything inside was tossed around. Her two dogs were safe, but she hadn't yet found her cat.

"I don't know where our gazebo went," she said. "The garbage can right there, that was in the front yard. The shed is gone. I don't know what else to tell you. This is the most tumultuous thing I've ever experienced by far."

The tornado destroyed 12 to 15 blocks in the southwest corner of Mapleton when it struck about 7:20 p.m. Saturday, Monona County Sheriff Jeff Pratt said. About a hundred homes were destroyed and 500-600 residents displaced, he said.

The tornado was on the ground for three and a half miles and measured three-quarters of a mile wide at one point, according to the National Weather Service office in Valley, Neb. The twister was measured to be on the lower end of an EF3, which carries wind speeds of 136 to 165 mph.

The tornado was one of several reported in Iowa. The weather service said it was assessing damage in Sac, Pocohontas and Kossuth counties Sunday after unconfirmed reports of tornadoes there as well.

In Mapleton, the roof was blown off a high school, power lines were downed and homes and buildings were destroyed. Pratt said two people were taken to hospitals with minor injuries. The weather service said it had gotten reports of 14 to 16 injuries, the most severe a broken leg.

Utilities also were damaged, and gas fumes filled the town, prompting officials to shut off service. Pratt said gas service will remain off for the next two weeks, but electricity should be restored in the next day or so.

The smell of natural gas hung thick in the air Sunday as forklifts and pick-up trucks hauled debris down streets lined with fallen trees.

Tamara Adams, 37, piled branches on the curb, next to the 30-foot-tall tree that rested on top of her house. She said she closed her outside basement door just as the tornado tore the roof off a store that sits diagonal from her house.

"That sound," she said. "I'll never get it out of my head. It had a life. You could hear it breathing and growling."

Terry Siebersma, who runs a downtown liquor store with his wife, was manning his shop when he heard the tornado sirens and saw the sky turn green. In the distance, he saw the twister swirl into view.

"It was almost like the movies," he said. "It was loud really loud."

Siebersma, 53, said he rushed to the basement. Upstairs, he heard bottles breaking. He emerged several minutes later, and the store looked fine. He said he walked to a back storage room and discovered the roof missing and one wall on the verge of collapse.

"We were very, very lucky," he said. "I almost feel guilty."

Gov. Terry Branstad issued an emergency proclamation covering Mapleton and surrounding Monana County on Saturday so the state could spend money to respond to the storm, his office said. He toured Mapleton on Sunday afternoon.

Monana County is in the same region of western Iowa where four Boy Scouts died in a tornado that struck a scouting ranch in June 2008. The National Weather Service said the tornado that hit the 1,800-acre Little Sioux Scout Ranch in the Loess Hills had an estimated wind speed of 145 mph.