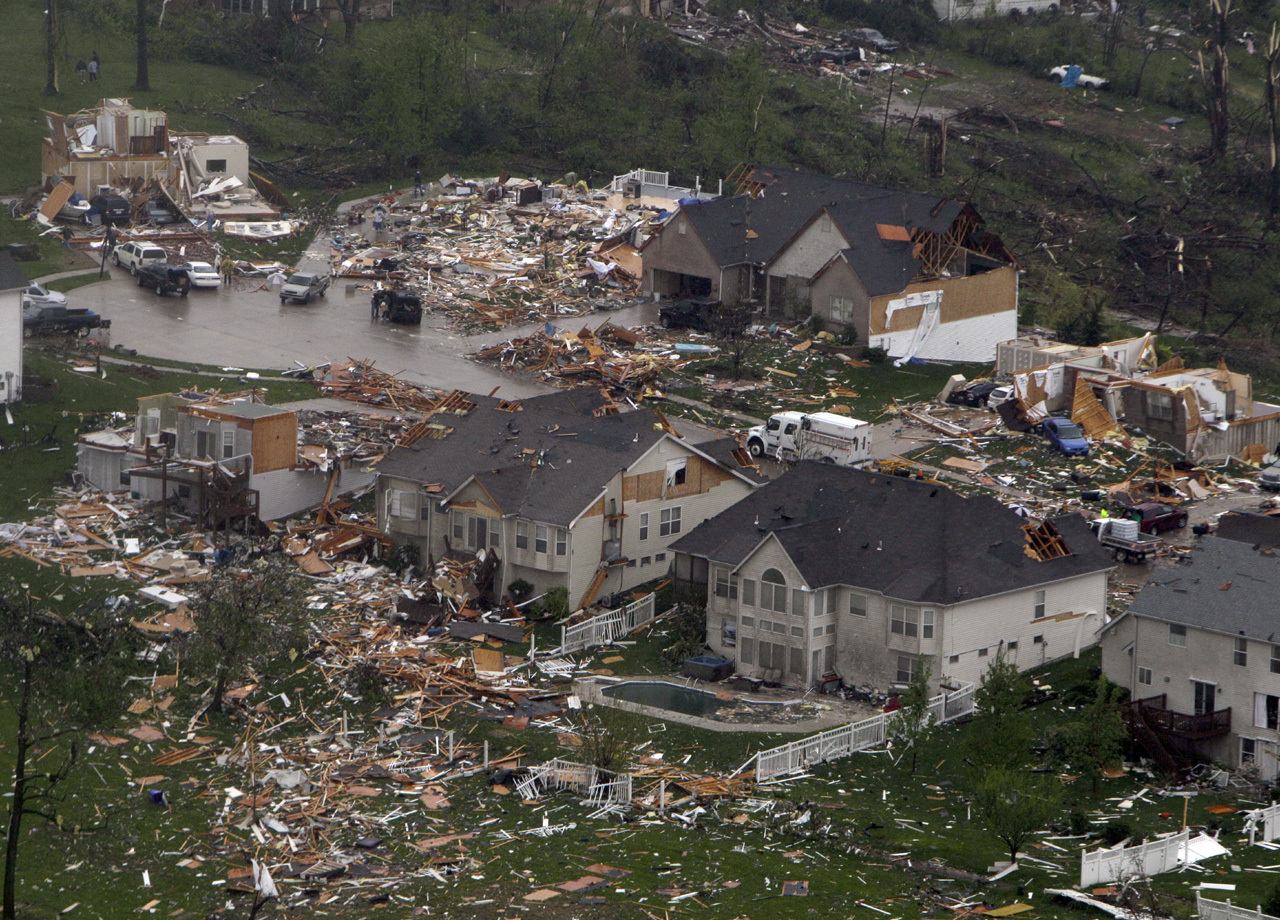 ST. LOUIS - Debris from splintered homes covered the ground in neighborhoods around St. Louis, while topped trees and overturned cars littered lawns and driveways. From the air, one home looked like a dollhouse that had had its roof lifted off. Looking down, the dining room table and other contents could be seen, damp in lingering rain.

Amid such damage, officials appeared awed that a tornado that roared through the area Friday night, striking the airport and several nearby suburbs, hadn't seriously injured anyone.

"It almost feels like a little bit of divine intervention when you look at the devastation," said Gov. Jay Nixon, who flew over the area to survey the damage.

Nixon said President Barack Obama pledged federal assistance Saturday during a phone conversation. Some 750 homes in the St. Louis region were damaged, and fewer than 100 were uninhabitable, the governor said.

Cleanup swung into full gear Saturday. With the din of chain saws and pounding hammers in the background, homeowners sifted through wreckage while crews scrambled to restore power to the 26,000 customers still without it.

At Lambert, workers boarded up windows and swept up glass in the main terminal, where the twister had torn off part of the roof and blown out half of the large, plate-glass windows. The domed design of the main terminal, dating to the mid-1950s, was the handiwork of Minoru Yamasaki, the Modernist architect of New York City's World Trade Center twin towers toppled in the Sept. 11 terrorist attacks.

The airport reopened Saturday night for a handful of arriving flights, and officials expected around 70 percent of the scheduled arrivals and departures to go on as planned early Sunday. The damaged concourse was likely to remain closed for up to two months.

"We're not going to have the prettiest airport tomorrow, but we will have an operating airport," airport director Rhonda Hamm-Niebruegge said.

Insurance adjusters converged in nearby Maryland Heights and Bridgeton, where roofers were going door to door to offer free temporary repairs.

"It's crazy -- like something you'd see in a movie," Tim Kreitler, 27, said as he helped a neighbor clean up in Bridgeton.

Vivi Magana, 17, and her parents were trying to clean up the mess at their Bridgeton home, where a huge tree in the front yard had been pulled out by the roots. An even larger tree in the back was split down the middle. A sliding glass door was shattered, and holes were in the roof.

Magana said the family was in the living room Friday night when her mother heard a roar of wind. As they rushed to the basement, Magana saw a lawn chair smash through the glass door. They emerged when the wind stopped.

"Everyone was screaming to make sure we were all OK," Magana said.

A spokeswoman for Southwest Airlines Co. said one of its planes was damaged when the wind pushed a conveyor belt for loading baggage into it. Five other planes on the ground when the tornado hit were OK, spokeswoman Marilee McInnis said. Southwest -- the biggest carrier at Lambert, with 85 departures per day -- canceled all St. Louis flights through 4 p.m. Saturday

American Airlines, which operates out of the heavily hit main terminal, said four of its planes were damaged, two of them significantly. Crosswinds of 80 mph buffeted one plane that was taxiing in from a landing when the tornado hit, and that plane was being checked for possible damage to its landing gear, spokesman Ed Martelle said. American canceled 51 flights on Saturday, five dozen on Sunday and its first seven Monday morning.

"We're going to have to re-create our infrastructure at Lambert," Martelle said. "The question is, how many additional gates can we borrow, because none of ours are going to be functional for some time."

Hundreds of travelers were delayed, and a dozen who stayed in the terminal Friday night were given pillows and blankets, Hamm-Niebruegge said. All had left the airport by Saturday morning, and officials thought most were staying with friends or family. Still, Hamm-Niebruegge said it could have been worse -- the storm hit on a night when the airport is generally less busy.

Scott Truett, a National Weather Service meteorologist, said it was possible that a tornado that touched down near the St. Charles County town of New Melle was the one that ripped into the airport and apparently other parts of St. Louis County. If that was the case, the tornado sustained itself for roughly 30 miles.

Truett said the twister followed the same track as one that tore up the area in January 1967, when one with winds of up to 200 mph ripped a 21-mile-long path of destruction across St. Louis County. That tornado stayed on the ground for roughly 35 minutes, leaving an estimated $15 million damage and killing three people.