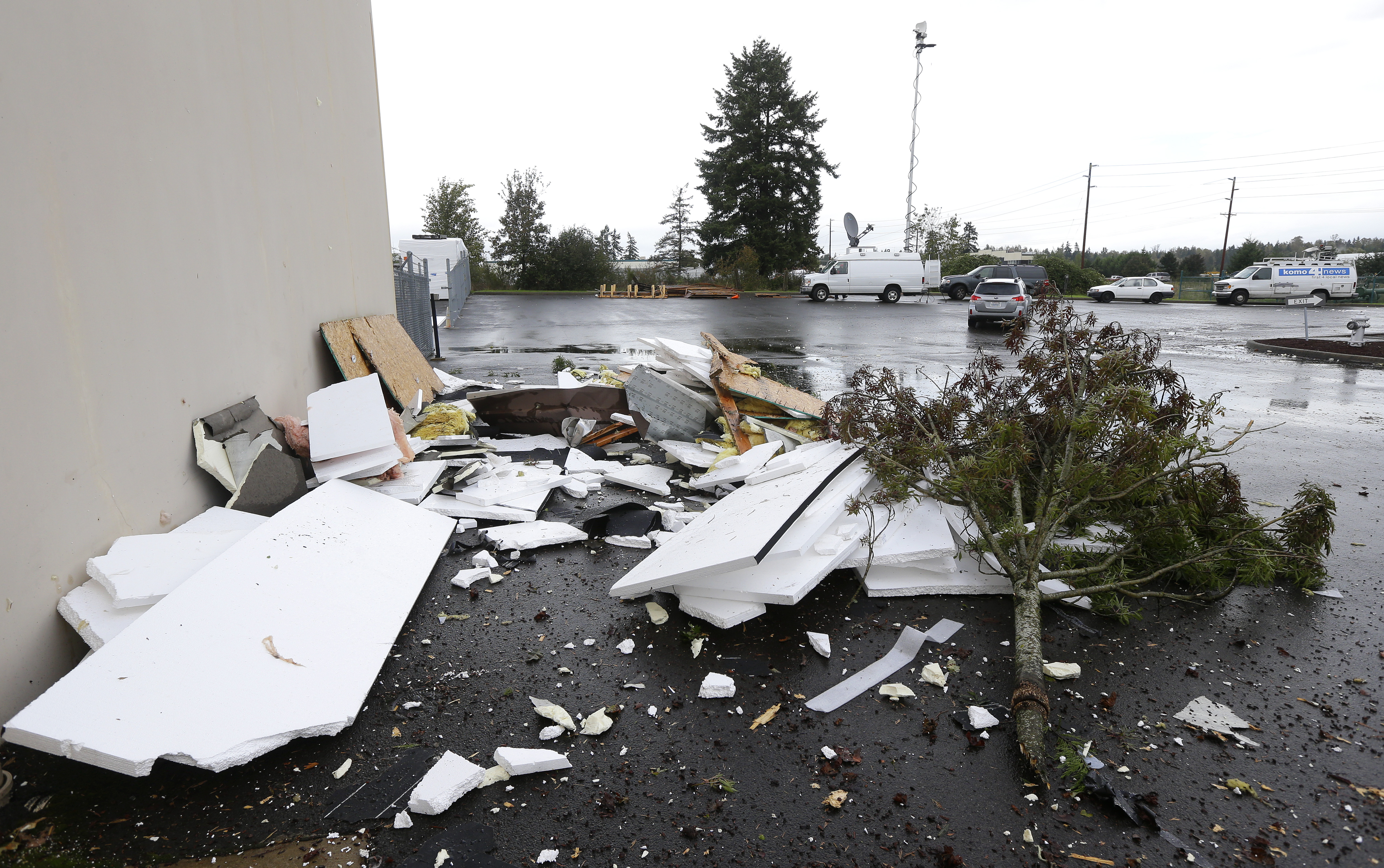 SEATTLE A tornado touched down in an industrial area south of Seattle on Monday morning, damaging buildings and uprooting trees as a storm that brought record rains and power outages to the Northwest moved through the region.

The National Weather Service said a tornado occurred at 7:45 a.m. in Frederickson, about 45 miles south of Seattle. The funnel cloud ripped tiles from the roof of a Boeing plant and blew windows out of cars in the parking lot. Central Pierce County Fire and Rescue said the powerful winds lifted a car. No injuries were reported.

Employees at Northwest Door, which manufactures garage doors, told CBS affiliate KIRO they were working when the twisting winds came up, knocked over a huge stack of material, hit the roof and ripped several trees out of the ground.

Employee Tony Lopez said he thought it was a piece of equipment blowing up at the garage door manufacturing plant.

"Then the ceiling just started rippling. Pieces started falling out. We thought it was an earthquake at first," Lopez told KIRO.

The storm set rainfall records for September in Washington and Oregon.

"We basically had conditions well off shore that were very reminiscent of late fall-early winter," said Dana Felton, meteorologist at the National Weather Service office in Seattle. "We had real cool air mass out of the Gulf of Alaska and a strong jet."

Most people in the Northwest expect summer-like weather to stretch well into the month to ease the shift into the rainy season. Not this year. "It was a pretty quick transition," Felton said.

Parts of the Northwest got more rain in a day or two than typically falls in the entire month. With Monday's precipitation still to be added, it's been the wettest September on record in Olympia and the second-wettest in Seattle. Nearly 8 inches fell in Olympia, topping a 1978 record and swamping the usual 1.7 inches that fall in that time, the National Weather Service said.

Sea-Tac Airport's September total of 5.6 inches came second to a 1978 record, while downtown Portland saw 6.2 inches - the most since record-keeping began in 1872. The previous record for Portland was 5.52 inches in September 1927.

High winds blew through Sunday night as the front moved east, knocking down trees that have not yet dropped their leaves. Winds off the Washington coast were clocked at up to 67 mph, the Weather Service reported.

With the worst of the storm past, cool, unsettled weather was forecast to continue to midweek. A low snow-level in the mountains mitigated the risk of flooding on most rivers, Felton said. It was snowing at Stevens Pass Monday morning and Paradise on Mount Rainier already had 5 inches.