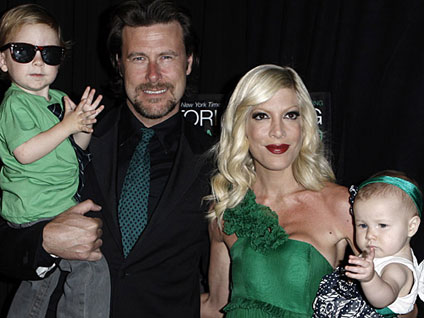 Technically, the toddler isn't the one actually doing the posting - his famous mom has been putting up pictures and quoting funny things he says.

Pictures: Stars and Their Moms


The first LiamsWorld post went up on July 10, and since then the tot has accumulated more than 15,000 followers.

Some of the cute things Liam has said include, "I love making jello castles. Jello wiggles and parties in my tummy" and "Oh no mama. We've got a problem... My butt is farting again."

Spelling's pictures on the Twitter account show the aftermath of her son getting into her makeup and a mess he made on his bedroom floor.

"The response was not what I expected. It was insane," Spelling told People magazine on Tuesday, adding that the account got more than 10,000 followers in just six hours after launching the page.

Spelling also said that the humor has lifted her husband's spirits while he's been recovering from a motorcycle accident.

"Once Dean came home from the hospital, Liam told Dean, 'You have to stay in bed. Doctor said you're sick. You have a boo boo,'" she told the magazine. "Dean is slowly recovering. He has a long road ahead and is still in a lot of pain. He's just taking it day by day, and the kids and I are good nurses!"

Please take the poll below and leave us your comments. Is 3 too young for a Twitter account? What age is appropriate?

And join us Tuesday, when we'll have tips for parents who want to text like their "cool" kids