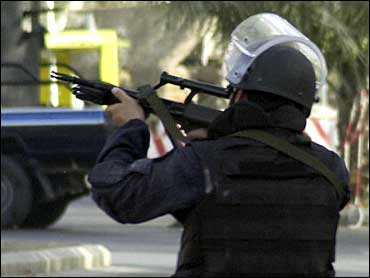 One of Saudi Arabia's most-wanted militants turned himself in Monday, a security official said, becoming the second militant to do so since King Fahd offered them temporary amnesty.

Othman Hadi Al Maqboul al-Amri, No. 21 on the list of 26 most-wanted militants issued by the Saudi Interior Ministry in December, surrendered near Halba bani Amr, 745 miles southwest of the capital, Riyadh, the security official said.

Al-Amri, a 37-year-old Saudi, later was taken to the Red Sea port city of Jiddah, the official said.

Last week, King Fahd promised to spare the lives of militants who surrendered within the next month. Those involved in attacks who turned themselves in still would face trial under the decree issued Wednesday, but the state would not seek their execution if convicted.

The surrender call came with a warning: those who ignore it would face the "full might" of Saudi authorities.

On Thursday, Saaban bin Mohamed bin Abdullah Alleihi al-Shihri, who was not among the 26 most-wanted militants, surrendered.

According to reports published in Saudi media, al-Amri is from the southwestern province of al-Namas and was a sergeant in the army.

Al-Amri, who married twice and has five children, disappeared in December 2002, his family said. Relatives speculated in Saudi press reports that he probably went to Iraq after the U.S.-led war started in March 2003.

During the past year, Saudi Arabia has seen suicide bombings, gun battles and kidnappings targeting foreign workers in the kingdom. The attacks have been blamed on al Qaeda and sympathizers of the anti-Western terror network.

The most recent attack was the June 12 kidnapping of American engineer Paul M. Johnson Jr., who was decapitated by his captors after the government rejected a demand to release all detained militants.