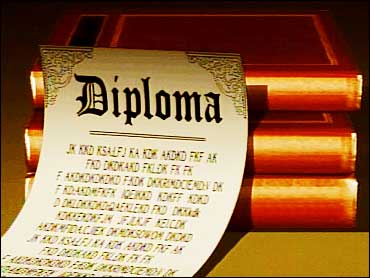 They are safety engineers at nuclear power plants and biological weapons experts. They work at NATO headquarters, at the Pentagon and at nearly every other federal agency. And, as CBS News Correspondent Vince Gonzales reports, they're employees with degrees from phony schools.

"These degrees aren't worth the paper that they're printed on," says one insider, who asked CBS News to protect his identity.

The man worked at a so-called diploma mill where students pay a lot of money to get a degree online or through the mail for little or no work.

He says he's not surprised to know that there are people working at almost every level of government who have degrees from these types of operations.

CBS News requested interviews with both officials. The Pentagon turned us down, saying, "We don't consider it an issue."

But using such a degree is a crime in some states. Alan Contreras cracks down on diploma mills for Oregon, a state that's taken the lead on this issue.

But we found employees with diploma mill degrees at the new Transportation Security Administration, the Defense Intelligence Agency and the Departments of Treasury and Education, where Rene Drouin sits on an advisory committee. He has degrees from two diploma mills including Kensington University.

Kensington was forced out of business by officials in California and Hawaii. Another Kensington alum, Florida State Rep. Jennifer Carroll, just stepped down from the National Commission on Presidential Scholars.

Both Carroll and Drouin say they worked hard and thought their degrees were legitimate.

"The students are being sold a bill of goods that really don't help them at all," the insider says. "There are slick people out there, and it's happening every day, every minute probably somewhere in America."

And taxpayers have paid for bogus degrees some workers used for hiring, promotions and raises.

In part II of the series, a congressional committee hears the results of an investigation into government employees and whether their B.A.'s, M.B.A.'s and Ph.D's are valid.