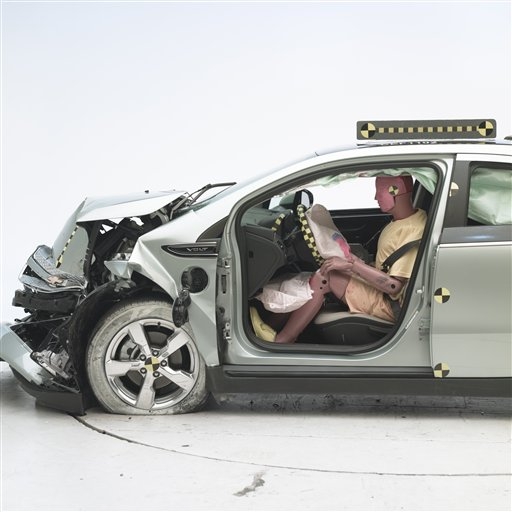 DETROIT - The Chevrolet Volt and Nissan Leaf got top safety ratings in some of the first-ever tests of electric cars by an insurer-funded research group.

Both cars, which hit showrooms late last year, earned top scores for front, side and rear-impact crashes and for rollover crash protection, according to results released Tuesday by the Insurance Institute for Highway Safety.

While both the Leaf and Volt are classified as small cars, the institute said their heavy battery packs put their weight closer to large sedans. The Volt, for example, weighs 3,760 pounds, which is close to the weight of the Chevrolet Impala. The Leaf weighs 3,370 pounds, which is similar to a Nissan Altima midsize car. That extra mass helps protect their occupants, since heavier cars are less likely to be pushed around in a crash.

The Leaf runs solely on battery power and has a range of around 100 miles. The Volt can go around 40 miles on an electric charge before a small gas engine kicks in.

The institute said it was the first time it has tested road-worthy plug-in cars. Two golf cart-like electric vehicles, the Gem e2 and Wheego Whip, were tested for research purposes but performed poorly in side-impact tests, the group said. But those cars run at very low speeds and aren't required to meet federal safety standards.

The federal government hasn't yet released crash-test results for the Volt and Leaf.

"What powers the wheels is different, but the level of safety for the Volt and Leaf is as high as any of our other top crash test performers," said Joe Nolan, the institute's chief administrative officer.

The institute, which is funded by insurance companies, buys the cars it tests directly from dealers.

Chevrolet says demand is outstripping supply for the Volt, reports CBS News correspondent Seth Doane, with Chevy saying it expects to sell 10,000 this year. And there are reportedly more than 20,000 people on the waiting list for a Nissan Leaf.

For the sake of comparison, Doane pointed to the Honda Accord and Toyota Camry, both of which go for roughly $19,000.

Also, the average price for one-kilowatt-hour of electricity is about eleven-cents, but rates can vary wildly depending on time of day. It's much cheaper, for instance, to charge a battery in the middle of the night.

Is an electric car right for you? And what's it like driving one? "Early Show" co-anchor Chris Wragge spoke about that with Popular Mechanics magazine Editor in Chief Jim Meigs. To see the interview, click on the video below: