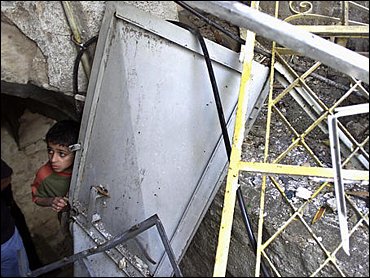 A senior Israeli official says it's time for Israel to get rid of longtime Palestinian leader Yasser Arafat.

Israeli Foreign Minister Silvan Shalom Wednesday said Arafat should be expelled, reports CBS News Correspondent Robert Berger. Appearing before the parliamentary defense committee, Shalom said as long as Arafat is on the scene, terror will continue and there will be no chance to move the peace process forward.

Shalom said Israeli generals do not oppose the concept of expelling Arafat, though they believe now is not the right time.

Shalom also said it is time for Palestinian Prime Minister Mahmoud Abbas to get down to business.

"We hope that he will do what all the world expects him to do, to put an end to terrorism, to stop the violence, to stop the incitement," Shalom said.

Shalom added that there is only so long Abbas can make excuses about why he's not fighting terror, or become as irrelevant as Arafat.

Meanwhile, the Chinese envoy to the Middle East met with Arafat on Wednesday, despite Israel's insistence that continued contact with the veteran Palestinian leader undermines efforts to make progress on an internationally backed "road map" to peace.

Abbas canceled a visit to the northern Gaza town of Beit Hanoun Wednesday after Israeli tanks and bulldozers re-entered and Palestinians accused Israel of throwing up further obstacles to peace.

Also Wednesday, Israeli troops found and destroyed an explosives laboratory hidden in a tunnel in the West Bank city of Nablus and demolished the house of a militant who was involved in a suicide bombing in January, the army said.

Abbas was scheduled to tour Beit Hanoun on Wednesday to survey damage from a five-day Israeli occupation aimed at deterring militants from firing primitive Qassam rockets at the Israeli town of Sderot, less than a kilometer (half a mile) away.

The troops demolished 15 houses, uprooted thousands of trees and damaged the water and sewage systems during the operation, witnesses said. Soldiers pulled back to the town's outskirts Tuesday but continued to hold territory inside the Gaza fence, where militants often set up and fire the rockets.

On Wednesday, 15 bulldozers rumbled back into the industrial area of Beit Hanoun "and started a new wave of destruction," said Sofian Abu Zaida, chairman of the Palestinian liaison committee with Israel.

"We were surprised that the army had come back in," Zaida said, adding that Abbas, also known as Abu Mazen, canceled his trip while Palestinian leaders made a call to the army to withdraw.

Witnesses said the army was constructing a road in the town. The army said Wednesday that troops had never withdrawn since the start of the operation and that operations in Beit Hanoun were ongoing.

The troop pullback Tuesday came despite a wave of Palestinian suicide bombings that killed 12 bystanders, hinting Israel might not undertake a large-scale punitive military operation that would further weaken Abbas, whom Israel sees as a crucial negotiating partner.

"The army presence is not only an obstacle and an affront to the Abu Mazen visit but an obstacle to any hope to achieve a lasting peace," Zaida said.

Abbas has said he will stop militants from carrying out attacks against Israel — required in Phase I of the so-called "road map" for peace — but has insisted that Israel honor its initial commitments as well, including freezing settlements and stopping army operations in Palestinians cities and villages.

The army also destroyed the Nablus house of an Al-Aqsa Martyrs' Brigade militant who carried out a suicide attack in Tel Aviv in January. Palestinian witnesses said eight families were left homeless by the demolitions. A house belonging to a second militant also was destroyed Wednesday in the city of Bethlehem, the army said.

In a telephone call with President Bush on Tuesday — the first since Abbas took office April 30 — the prime minister "stressed the importance of Israel implementing the road map, freezing settlements and stopping their attacks on Palestinians cities and villages," said Palestinian Information Minister Nabil Amr.

The road map is a three-stage, three-year plan that starts with an end to 31 months of violence and leads to creation of a Palestinian state.

Mr. Bush also called Sharon Tuesday and, according to The New York Times, is considering a trip to the Mideast, although Israel itself is unlikely. The president might thank U.S. troops in Qatar or Kuwait, and, while in the region, meet with Abbas and Sharon.

Sharon has posed 15 reservations to the road map plan, most of them about security, and was to discuss them in talks with Bush originally set for Tuesday in Washington. Sharon postponed the visit after suicide bombers carried out five attacks on Israel in less than 48 hours. A new date has not been announced.

Also Wednesday, China's Middle East envoy became the latest in a series of foreign leaders to meet with Arafat, despite Israel's insistence that such meetings undermine Abbas' fledgling government and hurt prospects for peace.

Israel, backed by the United States, has boycotted Arafat, saying he is linked to terrorism and has not clamped down on Palestinian militants believed to be behind the suicide attacks.

Sharon's Cabinet decided recently that foreign visitors — notably EU leaders touring the region on peace missions — who meet with Arafat will not be received in Jerusalem. EU leaders say they still consider Arafat a player in the peace process.

Arafat named Abbas as prime minister only after giving in to intense international pressure, and critics say he has been trying to undermine him. On Tuesday, Arafat issued an order removing the regional governors from the authority of the interior ministry to his own office, a senior Palestinian official said, speaking on condition of anonymity. Abbas is the interior minister; the move is seen as another attempt by Arafat to limit Abbas' powers.