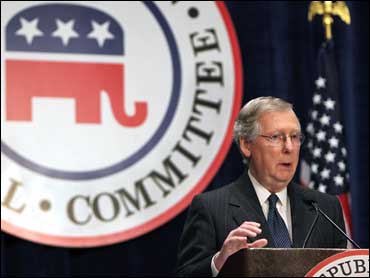 After crushing defeats in back-to-back elections, the top Senate Republican warned Thursday that the GOP risks remaining out of power in the White House and Congress unless it better explains its core principles to woo one-time faithful and new loyalists.

"Unless we do something to adapt, our status as a minority party may become too pronounced for an easy recovery," Sen. Mitch McConnell, R-Ky., told the Republican National Committee on Thursday. "The situation is challenging, but it's far from irreversible."

McConnell gave a stark assessment of where the Republican Party went wrong and provided a road map for how it can right itself as he spoke party activists gathered in Washington to choose the next national chairman.

A fifth - former Tennessee GOP chairman Chip Saltsman - dropped out of the race on Thursday with little explanation, saying only in a letter to RNC members: "I have decided to withdraw my candidacy."

Saltsman, who ran former Arkansas Gov. Mike Huckabee's failed presidential campaign last year, was considered a long-shot candidate who several Republican officials said likely wouldn't have had enough support even to be formally nominated had he continued his bid.

It faltered in December after he drew controversy for mailing a 41-track CD to committee members that included a song titled "Barack the Magic Negro," by conservative comedian Paul Shanklin and sung to the music of "Puff, the Magic Dragon." Despite criticism, Saltsman didn't apologize and defended the tune as one of several "lighthearted political parodies" that have aired on Rush Limbaugh's radio show.

All of Duncan's challengers have spent the past few months arguing that he simply represents a continuation of Bush; Duncan has argued he has the experience to make necessary changes.

Republicans say it's all but certain no one will get a majority on the first ballot when the 168-member RNC votes. Republicans say Duncan leads in endorsements for a second two-year term, with Steele, Dawson and Anuzis in competitive positions, while Blackwell trails. Still, with at least two rounds of balloting expected, it's possible anyone could end up with a majority.

Just eight years after Republicans controlled the White House and Congress, the GOP finds itself out of power and trying to figure out how to rebound while its foe has grown much stronger. The Democratic Party is empowered by a broadened coalition of voters - including Hispanics and young voters - who swung behind President Barack Obama's call for change.

Meanwhile, Bush left the White House with low job approval ratings, Republicans saw their ranks in Congress grow even smaller and the party finds itself without a standard-bearer. Perhaps even more damaging to the GOP, the slice of the country that calls itself Republican has shrunk over the past few years as Obama and his Democrats attracted voters of all political stripes.

Implicit in McConnell's message was the concern that the Republican Party under Bush strayed from its beliefs, resulting in drubbings in two straight elections.

While McConnell praised Bush as a man of principle, he said: "We can all agree, sad as it is, that he wasn't winning any popularity contests. And history shows that unpopular presidents are usually a drag on everybody else who wears their political label."

McConnell called for the GOP to embrace its conservative principles - and resist diluting its message - to bring people back and attract new rank and file. Still, he added: "It's clear our message isn't getting out to nearly as many people as it should. ... Too often we've let others define us. And the image they've painted isn't very pretty."

He acknowledged GOP fears that certain demographics from certain regions have shunned the party. And, he warned: "In politics, there's a name for a regional party: it's called a minority party."