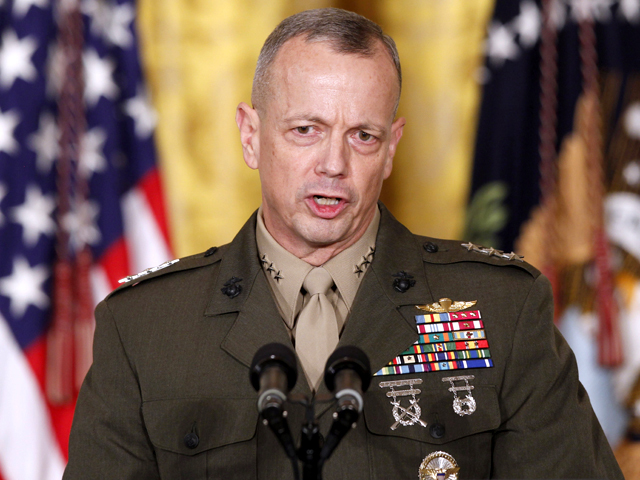 (AP) WASHINGTON - The U.S. must stick to its strategy in Afghanistan, including the planned withdrawal calendar, over the next several months despite recent setbacks that have tested America's relations with the Afghans, the top U.S. commander for the war is telling Congress.

Gen. John Allen is heading to Capitol Hill Tuesday for the first time since the Quran burnings and last week's shooting spree, allegedly by a U.S. soldier, inflamed anti-American sentiment in Afghanistan. The incidents spawned attacks against U.S. forces and prompted Afghan leaders to demand that American troops pull out of local villages and rural areas.

The upheaval has fueled Congressional opposition to the war, insuring that Allen will face lawmakers who are bitterly divided and increasingly skeptical of the administration's strategy.

In frank testimony prepared for delivery to the House Armed Services Committee Tuesday, Allen argues that while the last few months "have been trying," the coalition and its Afghan allies have made progress and degraded the insurgency.

"This campaign has been long. It has been difficult, and it has been costly. There have been setbacks, to be sure, we're experiencing them now, and there will be more setbacks ahead," Allen says. "I wish I could tell you that this war was simple, and that progress could be easily measured. But that's not the way of counterinsurgencies."

Allen's testimony, which was obtained by The Associated Press, comes at one of the most troubled points in the decade-long conflict, as election politics in America and Afghanistan, coupled with the unpopularity of the war, put unprecedented pressure on U.S. commanders to get troops home.

In recent weeks, U.S.-Afghan relations have been strained by the burning by Qurans and other religious materials at a U.S. military base, followed by the massacre just over a week ago of 16 Afghans, including women and children, allegedly by an American Army soldier. Afghans were further angered when the soldier, Staff Sgt. Robert Bales, was flown out of Afghanistan and taken to Fort Leavenworth's military prison in Kansas.

The Quran burnings sparked a week of riots and retaliatory attacks that left more than 30 people dead, including six U.S. soldiers.

Against that backdrop, Allen will tell Congress that while there is much hard and deadly work ahead, "the progress is real, and, importantly, it's sustainable."

The chairman of the House panel, Rep. Howard "Buck" McKeon, R-Calif., has pushed for the U.S. to be cautious pulling troops out, so the move won't risk the gains that have been won.

"An insurgent is the toughest kind of opponent a democracy can fight. Rooting them out takes patience," he said last week.

But Rep. Adam Smith, D-Wash., a top Democrat on the committee, is among those calling for a faster withdrawal.

"It is time to bring our troops home, and, while the president has laid out a responsible path to do so, we should continue to look for every opportunity to accelerate our timeline," Smith wrote in an opinion piece in USA Today.

One senior military official said Monday that while Allen will face tough questioning about the direction of the war, he will urge perseverance in the strategy. Defense Secretary Leon Panetta delivered a similar message last week as he traveled to Afghanistan, insisting that the U.S. must not lose sight of its mission.

The U.S. currently has about 90,000 U.S. troops in Afghanistan and plans to withdraw another 22,000 by fall. Panetta has said he does not expect to get the schedule for the withdrawal from Allen until later this spring, and that there are no firm plans yet for additional troop withdrawals through the end of the year.