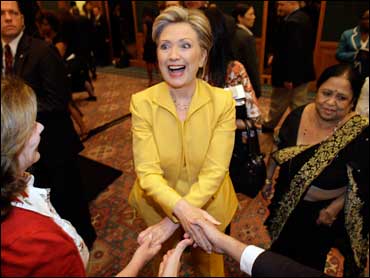 A top Hillary Rodham Clinton fundraiser threw her support behind Republican John McCain on Wednesday, saying he will lead the country in a centrist fashion and accusing the Democrats of becoming too extreme.

Lynn Forester de Rothschild, said she believes that the Democratic nominee, Barack Obama, along with other prominent Democratic officials such as the head of the Democratic National Committee Howard Dean, would take the party "too far to the left."

Rothschild is also a member of the Democratic National Committee's Platform Committee. She said she would be stepping down from her position on the committee but will not switch political parties.

She praised McCain for working with Democrats to pass legislation and for standing up to President Bush on the Iraq war.

"I just ask, who has Barack Obama ever stood up to? And that troubles me a lot," she said.

Rothschild also disputed Obama's argument that a McCain administration would be an extension of Bush's presidency. Democrats cite McCain's own account of having voted in support of Bush's policies 90 percent of the time.

She said the Arizona senator has broken with Bush to support funding for stem-cell research and to curb greenhouse gas emissions.

"It is the classic cheap shot. Just not true," she said.

Rothschild said she was also excited by the prospect of a woman being in the White House, even though she and Republican vice presidential nominee Sarah Palin disagree on issues. The Alaska governor opposes abortion except in the case of a threat to the mother's life. Rothschild said she supports abortion rights.

"I believe that the McCain-Palin government will be a centrist government," Rothschild said. "It's not going to be an ideological government."

Rothschild is a member of the DNC's Democrats Abroad chapter and splits her time living in London and New York. She was one of Clinton's top fundraisers, bringing in more than $100,000 for her presidential campaign. She built a multimillion-dollar telecommunications company before marrying international banker Sir Evelyn de Rothschild.

Rothschild said she has not discussed her support for McCain with Clinton.

"I'm sure she is not pleased with what I'm doing today," she said. "But you know what? I have to do what I believe in."