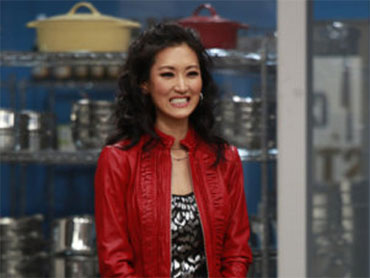 A dish of redemption is on the menu as six contestants from Top Chef Masters Season One square off to make some pub food Top Chef style. The challenge is to take pub classics and kick them up to gourmet levels.

"Didn't I beat you already," was the refrain from Chef Graham Elliot Bowles as walked in and pointed to Chef Wylie Dufresne.

Some undercurrents of tension appear as Chefs Ludo Lefebvre and Rick Moonen-a re-known master of seafood squabble over who will make a fish and chips dish. Moonen then encountered Chef Mark Peel at the seafood counter buying fixings for seafood sausage. The gauntlet is dropped as these master chefs look to avenge errors they made last year on Top Chef Masters.

Chef Peel is the chef/co-owner of Los Angeles' dining stalwart Campinele. His long kitchen career includes stints with celebrity chef Wolfgang Puck in several of Puck's restaurants. His training is classic French, but the menus at Campinele, The Point, and Tar Pit Bar are Greek/Mediterranean infused.

After an hour of prep in the Top Chef kitchen, the chefs made a run to Tom Bergin's Tavern for final prep.

Tom Bergin's is a small place with a small kitchen-and the tempers flared as it looked like the chefs were cooking in cages.

Chef Ludo Lefebvre offered his take on Irish Stew by lightening it up and making it colorful.

Chef Lefebvre is no stranger to Top Chef Masters-he was on season one as well as other competitive cooking shows like Iron Chef. He is the chef/owner of Los Angeles hot spot Ludo Bites.

Chef Moonen brought out his take on fish and chips, offering up fried sable with a lemon confit tarter sauce and twice fried potatoes.

A master of seafood Chef Rick Moonen has taken the cause of sustainable seafood practices to heart. He is the author of the 2008 book "Fish Without a Doubt." After working in and owning several places in New York, Moonen is now the chef/owner of RM Seafood in the Mandalay Bay Casino in Las Vegas.

Chef Dufrense brought out his bangers and mash with mixed meats in the sausage and smoked smashed potatoes.

Chef Peel did a spin on Toad in the Hole with a seafood sausage with onion sauce and lobster broth. The traditional Yorkshire pudding served with the dish did not come out well, and Peel tried to hide it.

An author and chef Jonathan Waxman has crossed the country from Berkley to Manhattan. Along the way he has written one cookbook (Great American Cook in 2007) and a new book due out next year from Simon and Schuster. He is the chef owner of New Yorks Barbuto.

Redemption comes for chefs Waxman and Moonen, as they move onto the championship round. Chef Waxman ringing up a near perfect score.

Early in the show, the chefs took on a Quick Fire from the pages of Top Chef season three-and the chefs had to pair their dishes with exotic cocktails featuring Russian Vodka. The goal is to create a dish that brings out the flavor of the cocktail while the cocktail compliments the dish.

Judging the Quick Fire from Real Housewives of Orange Counthy was Alexis Bellino and Tamra Barney. It turned out the judges for the Quick Fire were an interesting cross section. One didn't eat port but there were two pork dishes. One didn't eat red meat and there was one red meat dish-which prompted an expletive from Chef Ludo Lefebvre.

With the judges clearly part of the challenge, the approach of the chefs was pretty interesting and diverse. Chef Dufresne went to an Artic Char with lentils and bacon-kind of a savory fish dish paired with a malt-vodka drink.

Chef Dufresne is no stranger to competitive cooking shows. This is his second tour on Top Chef Masters. He has also competed on Iron Chef and has served as a judge on Top Chef. He is the chef/owner of New York City's renowned WD-50.

Chef Jonathan Waxman proved he knew his audience for this dish. He finsihed a full 20 minutes before the other chefs, and offered appetizer sized pork tenderloin and poblano stuffed shrimp with an avocado butter sauce which was good enough to win the challenge.

Chef Bowles uses Judges table to roll out the line of the night, when answering a question about being back on Top Chef Masters he referred to the panel of chefs as icons--and then called Chef Waxman, "The Jedi Master of chefs."

Something to watch as the season rolls on. Some gamesmanship perhaps-as tonight's show started, week two winner Marcus Samuelsson offered this Twitter taunt, "I wonder who will join Carmen Susan Tony and my self in the next round."