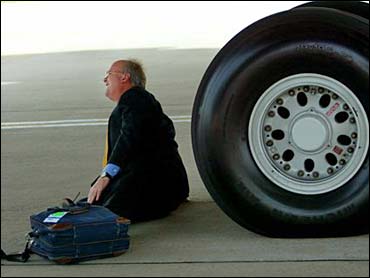 Karl Rove laid himself on the line for his boss, the president of the United States.

That is, he laid himself under the wheels of Air Force One on Monday. Reason: Unclear, but it seems to have been an inside joke between Rove and President George W. Bush.

Returning to the aircraft after Mr. Bush's foreign policy speech, the two men traded words. As Mr. Bush climbed the stairs, his top political adviser set his briefcase down in front of the tires and stretched out on the ground with his back to the wheels.

Rove stood back up moments later; a smiling Bush waved from the plane and they both got aboard.

"It was a humorous moment on the campaign trail," was all Bush campaign spokesman Scott Stanzel would say about Rove's antic.