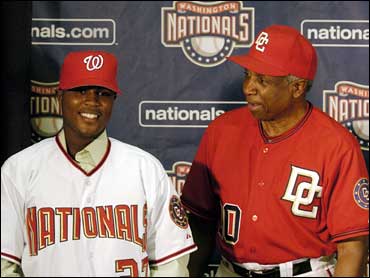 A top baseball prospect from the Dominican Republic who received a $1.4 million signing bonus from the Washington Nationals lied about his age and name in what team president Stan Kasten called "an elaborate scheme."

"This was a deliberate, premeditated fraud" that involved bribes, along with falsified hospital and school records, Kasten said.

In July 2006, to much fanfare, the Nationals signed a 16-year-old shortstop named Esmailyn "Smiley" Gonzalez and held a news conference at which general manager Jim Bowden compared the player to Hall of Famer Ozzie Smith. Still known as Gonzalez, he wound up leading the rookie-level Gulf Coast League with a .343 batting average in 2008 and was honored as the league's MVP.

But while the Nationals have been listing his date of birth as Sept. 21, 1989 — which would make him 19 now - Kasten said Wednesday that a Major League Baseball investigation determined Gonzalez is actually Carlos David Alvarez Lugo, born in November 1985 - meaning he is really 23.

"This is going to have serious repercussions," said Kasten, who spoke to reporters after SI.com first reported on Gonzalez/Lugo. "I have people examining all possible avenues of recourse, with regards to any legal and financial concerns."

While Kasten said there were "a number of people involved" in the hoax, he would not say whether anyone employed by the Nationals is suspected of playing a role.

"I'm not going to say anything right now while the investigation continues," Kasten said.

As for the player, Kasten said: "This is a big difference between being a 16-year-old and a 20-year-old. Do I know what his future holds as a baseball player? I don't. I would say clearly he remains a prospect - but I would say a very different kind of prospect - today. I'm not prepared to say what is going to happen in his career just yet."

He would be scheduled to report to Nationals minor league camp March 13.

"I didn't know anything about this. I never had any indication that he was anyone other than Esmailyn. I feel bad for the organization, and I feel bad for the kid," the player's agent, Stanley King, said in a telephone interview.

"This thing is unraveling like a Greek tragedy," King said.

Jose Rijo, a special assistant to Bowden, was credited with spotting Gonzalez in the Dominican about two years before the Nationals signed him.

"I loved him from the beginning," Rijo said Wednesday in the home clubhouse at Space Coast Stadium, where the Nationals hold spring training.

While New York-based agent Rob Plummer was responsible for negotiating on Gonzalez's behalf with other major league teams in 2006, talks with the Nationals were done strictly by Basilio Vizcaino, a "buscon" — a middleman who often trains players in Latin America with the hope of getting a share of the money if the athletes sign with major league organizations.

Plummer, who specializes in representing baseball players from the Dominican Republic, said in a telephone interview Wednesday that he had heard about two years ago that Gonzalez used a fake age.

"I found out that Gonzalez was four or five years older, but nobody asked me about it. By then, I was no longer involved," Plummer said.

Plummer and King - who began representing Gonzalez five or six months after he signed with the Nationals - both said neither the Nationals nor Major League Baseball contacted them in the course of the recent investigation.

Kasten said MLB is responsible for checking the documents of Latin American prospects and that Gonzalez was given the OK - twice, both at the time of his signing and then again in 2007 after Kasten said he heard rumors of "irregularities ... whether it was the amount of money or where the money wound up going or whatnot."

In recent years, several players in the majors and minors such as Miguel Tejada, Rafael Furcal and Bartolo Colon were found to be older than originally thought.

Most of the discrepancies involved players from Latin American countries, and were discovered when visas, birth certificates and other documentation were checked more closely following the Sept. 11 attacks.

"In the Dominican, you never know. You just never know anymore. That (stuff has) been going on for so long," Rijo, the 1990 World Series MVP for the Cincinnati Reds, said of players lying about their ages.

Asked whether he had ever seen Gonzalez's documents, Rijo said: "You see a document, but you're going to see a real or a fake one, anyway. It doesn't matter. But you've got to go through Major League Baseball before you can get the kid to sign. "

Shortly after those comments, the Nationals announced that Kasten would be the only member of the organization, including Bowden, who would speak about the matter.

Kasten credited MLB's department of investigations - established after a recommendation in the Mitchell Report - with uncovering the hoax.

"It was kind of amazing how we finally broke through and got someone to confess," Kasten said, "and then the dominoes started falling."