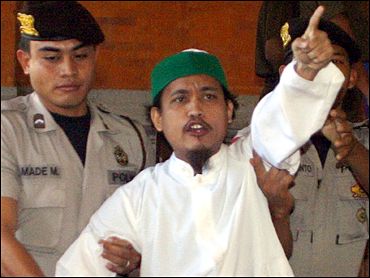 Police said Monday they have arrested one of the top organizers of last year's Bali bombings as he was preparing more terrorist attacks with a gang of fellow al Qaeda-linked militants.

In Bali, meanwhile, prosecutors recommended to a court that an Islamic militant known as the "smiling bomber" be sentenced to death for his alleged role in the bombings. It was the first sentence demand for those being tried over the attack.

"He has confessed to his entire role in the bombing," Bali police chief Maj. Gen. I Made Mangku Pastika told The Associated Press. "This is a very important arrest."

The arrest appeared to be a major victory for Indonesia, the world's most populous Muslim country, in its fight against Islamic militancy. The United States renewed its travel warning for the country on Friday, saying terrorists may be planning new attacks on U.S. targets.

The warning said that additional terrorist plans may have been laid, and that because of tighter security at official U.S. offices, "terrorists will seek softer targets."

"These may include facilities where Americans are known to live, congregate, or visit, especially hotels, clubs, restaurants, places of worship, schools, or outdoor recreation events," the warning read.

Pastika said Idris, who like many Indonesians uses only one name, was part of a gang that robbed a bank in Medan city, Sumatra island, last month. The money was to be used to fund an unspecified terror operation, he said.

Idris and 10 other alleged members of the gang, who have all been accused of being members of the regional Islamic militant group Jemaah Islamiyah, were arrested June 12 in Medan, police said.

Jemaah Islamiyah has been blamed for the Bali bombings. Many of the 34 suspects arrested over the blasts at two nightclubs have admitted to being members of the group — including one who fought alongside Osama bin Laden.

Jemaah Islamiyah's goal is to establish a pan-Islamic state across Southeast Asia and the group has been accused of planning a series of other attacks on Western targets across the region, including Singapore, Thailand and the Philippines.

More than 100 suspected Jemaah Islamiyah members have been detained in Southeast Asia. The group's alleged spiritual leader, Abu Bakar Bashir, is on trial in Jakarta on treason charges and over a string of church bombings on Christmas Eve 2000.

Prosecutors have accused Idris of being part of the group and serving as the deputy to Imam Samudra, the alleged mastermind of the Bali bombings. Samudra is one of three bombing suspects already on trial.

Idris — who uses the aliases Joni Hendrawan and Gembrot — allegedly attended many of the key planning meetings for the Bali attack and handled most of the group's logistics.

He also stands accused of providing Bali suspect Amrozi bin Nurhasyim with the money to buy bomb-making materials and was with him when he bought the minivan used in one of the bombings.

The 35-year-old Idris is believed to have studied in an Islamic school in Malaysia that was headed by Ali Ghufron — one of three suspected Jemaah Islamiyah members who is also on trial for the Bali attack.

Pastika said three other Bali bombing suspects remain on the run, including Dulmatin, who allegedly built the bombs used in Bali.

Police are also hunting for the former Jemaah Islamiyah operations chief, Riduan Isamuddin, also known as Hambali. He is still at large and believed to be bin Laden's point man in Southeast Asia. However, he has not been directly implicated in the Bali bombings.

In the Bali trial of Amrozi on Monday, prosecutors called on the court to sentence the defendant to death.

"We conclude that the defendant is responsible for terrorist acts that have caused anxiety, damage and the loss of lives," Prosecutor Urip Trigunawan told the Denpasar District Court.

Amrozi listened impassively and stroked his beard when the sentence request was made.

The father of an Australian killed in the bombings, Antony Stewart, cried out, "Amrozi, you die!" immediately after the prosecutor made his comments.

If executed, Amrozi would be killed by firing squad.

Amrozi was the first of 34 suspects to go on trial over the bombings.

Prosecutors have accused Amrozi, a 40-year-old mechanic, of buying the materials and the minivan used in one of the attacks. In earlier testimony, he admitted his role in the Bali bloodshed and told his lawyers he was ready for punishment.

Soon after his arrest in November, Amrozi was dubbed the "smiling bomber" after he outraged survivors and relatives of victims when he appeared giggling before TV crews.

He has said he took part in the attack to avenge the suffering of Muslims at the hands of the United States and its allies.