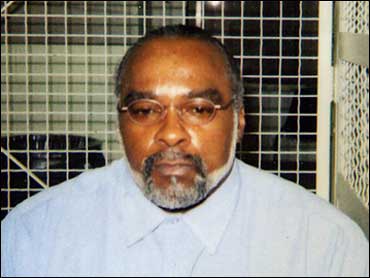 Officials at San Quentin State Prison seemed to have trouble injecting the lethal mixture into his muscular arm, apparently struggling to find a vein.

"It took them, it may have been 10 minutes to deal with that. Williams at one point grimaced, it looked almost at frustration at the difficulty there," media witness John Simerman of the Contra Costa Times told CBS Radio News.

"You doing that right?" it sounded as if he asked one of the men with a needle.

Five of his supporters witnessed his death.

"One witness pumped his fist in the air, a symbol of black power," said Crystal Carreon of the Sacramento Bee.

And three of Williams supporters shouted as they left the room after his death.

Barbara Becknell and the supporters said, "the State Of California just killed an innocent man," said Rita Cosby of MSNBC, another media witness.

Outside the prison, there was "utter silence for maybe 30, 45 seconds, no one moving. You could hear a pin drop. People letting it sink in that it had finally happened," reports Ron Kilgore of CBS radio station KNX-AM. Then Williams' supporters broke out again in song.

In the final hours before his execution, Williams refused to have the last meal traditionally offered to the condemned, and he told prison officials he didn't want to be visited by a spiritual advisor or the prison chaplain, reports CBS News correspondent John Blackstone. As he waited in a holding cell near the execution chamber he was given a bundle of letters sent to him from people across the country.

The case became the state's highest-profile execution in decades. Hollywood stars and capital punishment foes argued that Williams' sentence should be commuted to life in prison because he had made amends by writing children's books about the dangers of gangs and violence.

In the days leading up to the execution, state and federal courts refused to reopen his case. Monday, Gov. Arnold Schwarzenegger denied Williams' request for clemency, suggesting that his supposed change of heart was not genuine because he had not shown any real remorse for the killings committed by the Crips.

"Is Williams' redemption complete and sincere, or is it just a hollow promise?" Schwarzenegger wrote. "Without an apology and atonement for these senseless and brutal killings, there can be no redemption."

Williams was condemned in 1981 for gunning down convenience store clerk Albert Owens, 26, at a 7-Eleven in Whittier and killing Yen-I Yang, 76, Tsai-Shai Chen Yang, 63, and the couple's daughter Yu-Chin Yang Lin, 43, at the Los Angeles motel they owned. Williams claimed he was innocent.

Witnesses at the trial said he boasted about the killings, stating "You should have heard the way he sounded when I shot him." Williams then made a growling noise and laughed for five to six minutes, according to the transcript that the governor referenced in his denial of clemency.

About 1,000 death penalty opponents and a few death penalty supporters gathered outside the prison to await the execution. Singer Joan Baez, M*A*S*H actor Mike Farrell and the Rev. Jesse Jackson were among the celebrities who protested the execution.

"A wise man once said the death penalty is about three things: politics, politics and politics and what we have seen today is that Governor Schwarzenegger is another cowardly politician," said Farrell.

"Tonight is planned, efficient, calculated, antiseptic, cold-blooded murder and I think everyone who is here is here to try to enlist the morality and soul of this country," said Baez, who sang "Swing Low, Sweet Chariot" on a small plywood stage set up just outside the gates.

A contingent of 40 people who had walked the approximately 25 miles from San Francisco held signs calling for an end to "state-sponsored murder." But others, including Debbie Lynch, 52, of Milpitas, said they wanted to honor the victims.

"If he admitted to it, the governor might have had a reason to spare his life," Lynch said.

Former Crips member Donald Archie, 51, was among those attending a candlelight vigil outside a federal building in Los Angeles. He said he would work to spread Williams' anti-gang message.

"The work ain't going to stop," said Archie, who said he was known as "Sweetback" as a young Crips member. "Tookie's body might lay down, but his spirit ain't going nowhere. I want everyone to know that, the spirit lives."

Among the celebrities who took up Williams' cause were Jamie Foxx, who played the gang leader in a cable movie about Williams; rapper Snoop Dogg, himself a former Crip; Sister Helen Prejean, the nun depicted in "Dead Man Walking"; and Bianca Jagger. During Williams' 24 years on death row, a Swiss legislator, college professors and others nominated him for the Nobel Prizes in peace and literature.

"There is no part of me that existed then that exists now," Williams said recently during an interview with The Associated Press.

Williams' statements did not sway some relatives of his victims, including Lora Owens, Albert Owens' stepmother. In the days before his death, she was among the outspoken advocates who argued the execution should go forward.

"(Williams) chose to shoot Albert in the back twice. He didn't do anything to deserve it. He begged for his life," she said during a recent interview. "He shot him not once, but twice in the back. ... I believe Williams needs to get the punishment he was given when he was tried and sentenced."