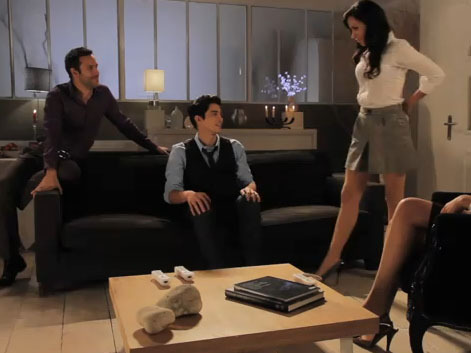 (CBS) - The Nintendo Wii game system is less than five years old, but a new game ad definitely implies it has decided to "grow up". A commercial for Ubisoft's "We Dare" is getting a lot of buzz right now online for its very suggestive and adult-oriented themes.

The "We Dare" game trailer slogan dares you to "have a spicy evening!" and redefines the very physical and traditionally kid-friendly console.

The commercial features a group of attractive men and women gathered together to play "We Dare" and shows scenes of them flirting with one another, kissing the Wii game controller and getting very close and physical in a build up to a "tongue-in-cheek" ending that I won't spoil.

But with the introduction of the very adult-oriented game to the kid-friendly system, does this mean Nintendo is "growing up" and redefining itself?

WHAT DO YOU THINK?
Does the new Ubisoft "We Dare" game for Nintendo's Wii go too far?