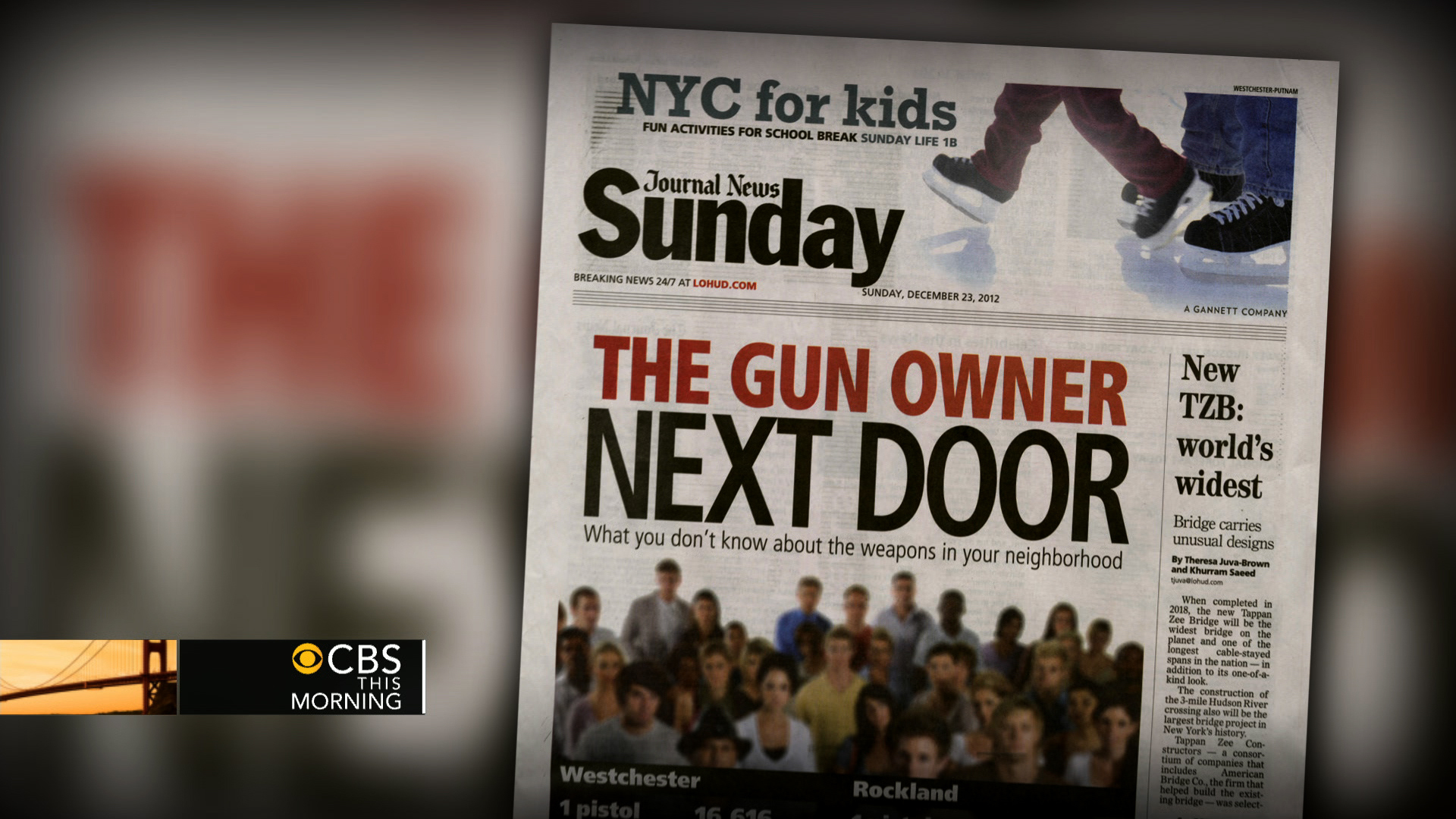 (CBS News) Earlier this week, the Gannett-owned The Journal News, a newspaper covering three counties in the Hudson Valley, published an interactive map revealing the names of addresses of thousands of people who are licensed to own a handgun in New York's Westchester and Rockland counties.

The decision to publish the information, obtained by a public-records request,

sparked outrage and raised questions  about the ethics of sharing personal information in the name of journalism. By Wednesday afternoon, the maps had been shared approximately 30,000 times on Facebook and other social media. Some commenters on the paper's website even posted what they say are the home addresses and phone numbers of the paper's staff.

Hub Brown, a journalism professor at Syracuse University, told "CBS This Morning," "Mapping-based journalism is a big trend right now, but we have to be very very careful about the types of information that we are going to publish here. In this case I think that the newspaper has gone a little bit too far in terms of publishing information that actually stigmatizes people."

The paper declined to speak to CBS News and instead issued a statement saying, "Sharing information about gun permits in our area was important in the aftermath of the Newtown shootings."

"I think it's a bit disingenuous of the Journal News to say that they are just giving information out here. They were taking a position on guns," Brown said.

Brown added that the issue is not a matter of legality but rather one of journalistic ethics. "It's not that they can't publish these kinds of things. The question is what do you publish, at what time, and how does it help your readers? And I don't know if this does."

John Miller spoke to authorities  in the area and said "The police chiefs don't like it," he said before adding that in Rockland County alone, there are "8,000 active or retired NYPD officers" and the information offers a map to their names and home addresses.

Miller explained that many gun owners in the area are actually law enforcement officials, who could be put at risk now that their personal information has been made public.

"40 percent of the people who are holding these gun permits are either active or retired law enforcement," Miller said, adding that criminals could use the tool to seek revenge. "These are people who have put people in jail for a long time, these are people who might be targets...[an] inmate might be looking for a home address and now it's just point and click."

"In the law of unintended consequences, you're giving people a map to [their] names and home addresses that's searchable," he added.

Miller also explained  that the map could provide value to robbers "looking to burglarize a home where you might steal guns," or conversely, those looks to avoid run-ins with gun owners.

Despite the mounting controversy, The Journal News says it will continue to publish similar information from a third country once it is compiled.